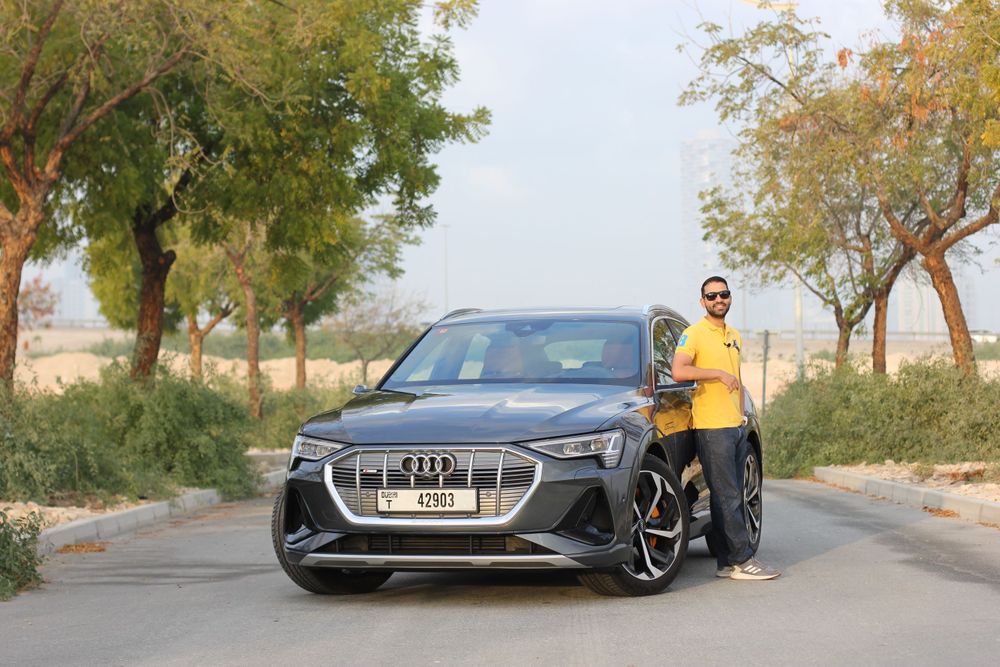 This is the review of the Audi e-tron Sportback, the newest addition to Audi’s electric line-up and yes that does mean it runs entirely on electricity and electricity alone. It doesn’t have an engine, it costs 457,000 Dirhams in the UAE, and competition comes in the form of the Tesla Model Y and the Mercedes-Benz EQC, but I have a feeling this is going to be a lot better. Read on to find out why… 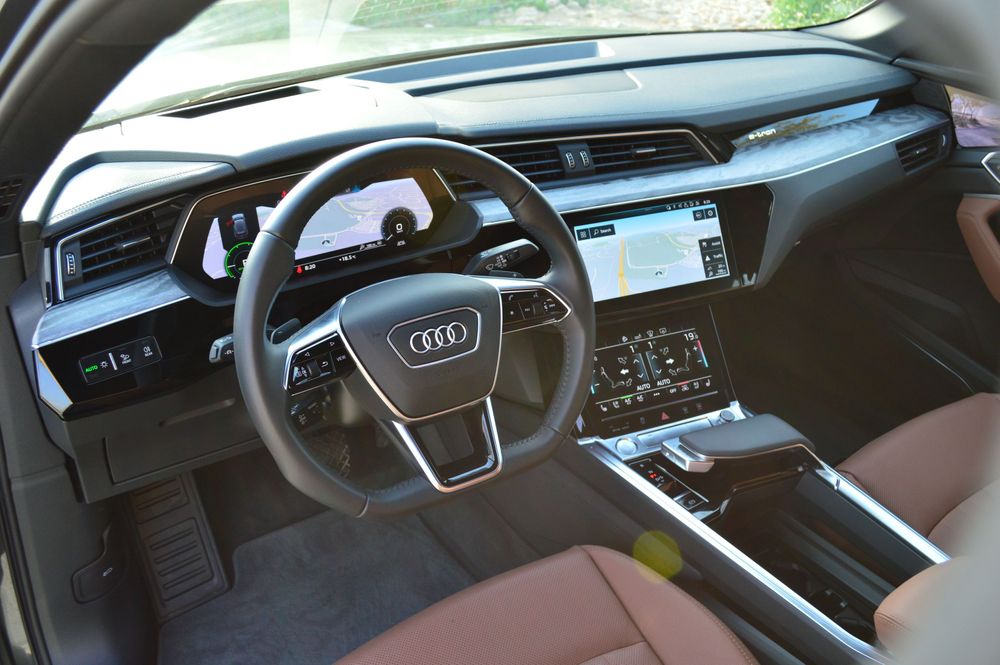 Powering the Audi e-tron Sportback is a 95 kWh battery pack that pushes 400 horsepower and 655 Nm of torque to two electric motors – one on each axle. Although the e-tron isn’t the fastest amongst its rivals, it still manages to do a 0-100km/h sprint in 5.7-seconds, hit a top speed of 200km/h, and enter corners at speeds most SUVs would not dare to.

When cruising around town or driving down the highway, the e-tron Sportback is extremely quiet and I know what you’re thinking, aren’t all electric cars quiet because they have not got an engine? Yes, they are, but this just feels refined. There is very little road noise that comes into the cabin, and wind noise is nearly non-existent. 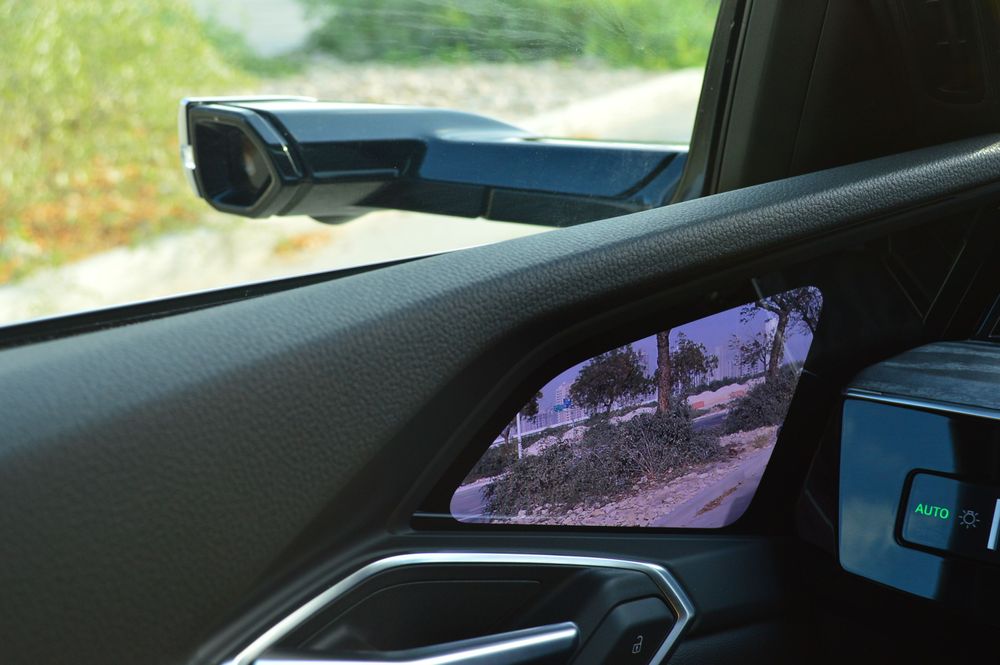 Range, which tends to be a big concern for electric car drivers, stands at 375 kilometers on a single charge. While that number might be on the lower side compared to its rivals, the e-tron is fitted with regenerative braking – meaning that each time you lift your foot off the accelerator pedal or press the brakes, the kinetic energy that was being used to push the car forward is converted into electricity and saved in the battery for use later on. Think of it as automatic charging while you drive.

Speaking of braking, the e-tron Sportback is fitted with paddle shifters behind the steering wheel that can be used to slow the car down. Each tap increases the level of energy recuperation. Level 0, signified by a small marker in the instrument cluster, means the e-tron drives like a regular car. Level 1, increases the electric motor’s deceleration for greater energy saving. And Level 2, which is the highest level, lets you enjoy the true joys of one pedal driving. 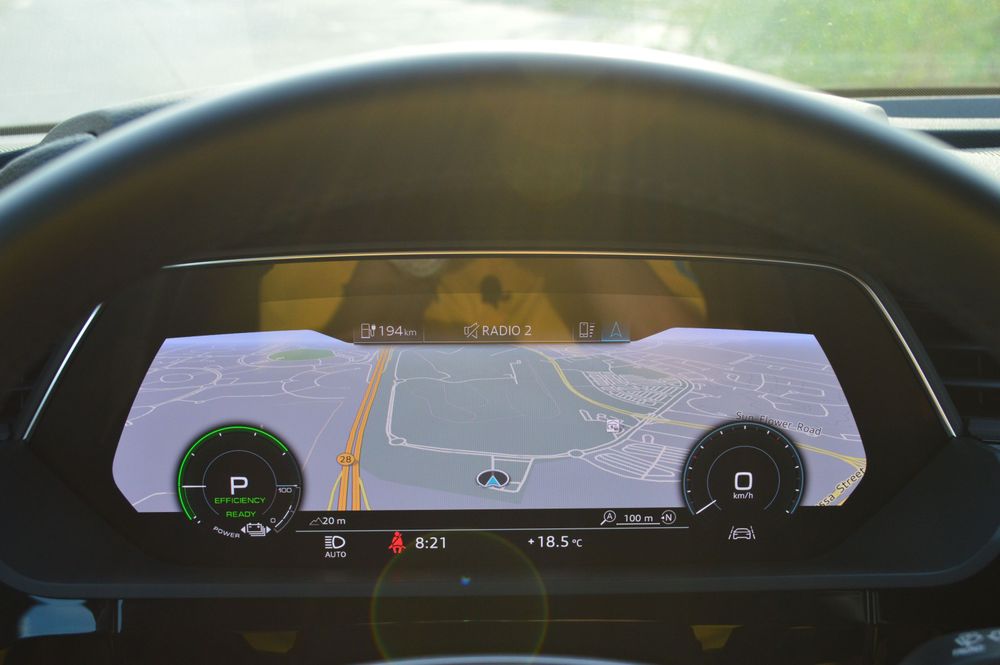 Having driven the e-tron Sportback for a couple of days, what I will say is that the e-tron has everything a traditional Audi has, from air suspension to multiple drive modes and it even has the same level of luxury and refinement. In fact, because it looks like a regular Audi and drives like one too; many people who sit in it would not even realize that it’s electric and that’s a wonderful thing, because that is how easy Audi has made it for people to adopt the electric vehicle lifestyle. 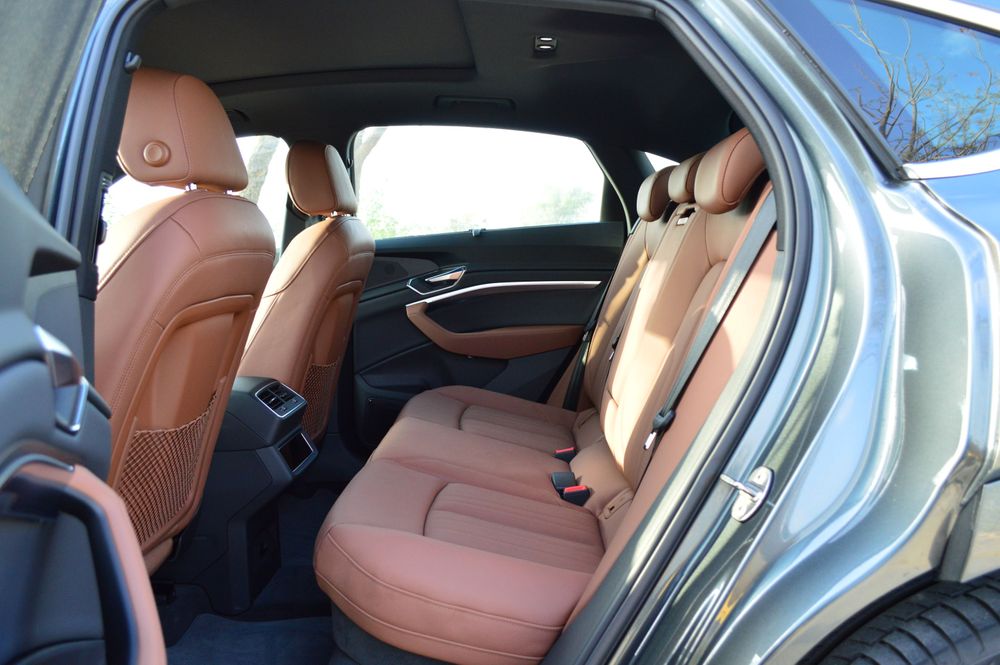 Inside, it’s the same design and quality that you would find in any modern Audi. Everything is exactly where you would expect it to be and the interior is molded around three large screens. There’s the digital instrument cluster that Audi calls the Virtual Cockpit, there’s another screen to control things like the sat-nav and your mobile phone connectivity, and then there’s another screen below it to manage the climate control system, seat ventilation, and key in destinations on the sat-nav.

Being a Sportback or an SUV Coupe as other brands would call it, you would not expect much headroom or legroom in the back but that’s where it will surprise you. Compared to the standard e-tron, the Sportback has just 2cm lesser headroom, which quite frankly, nobody will be able to tell. Making the journey even more comfortable for those in the back is a 4-zone climate control system, cup holders, and a few USB charging outlets. 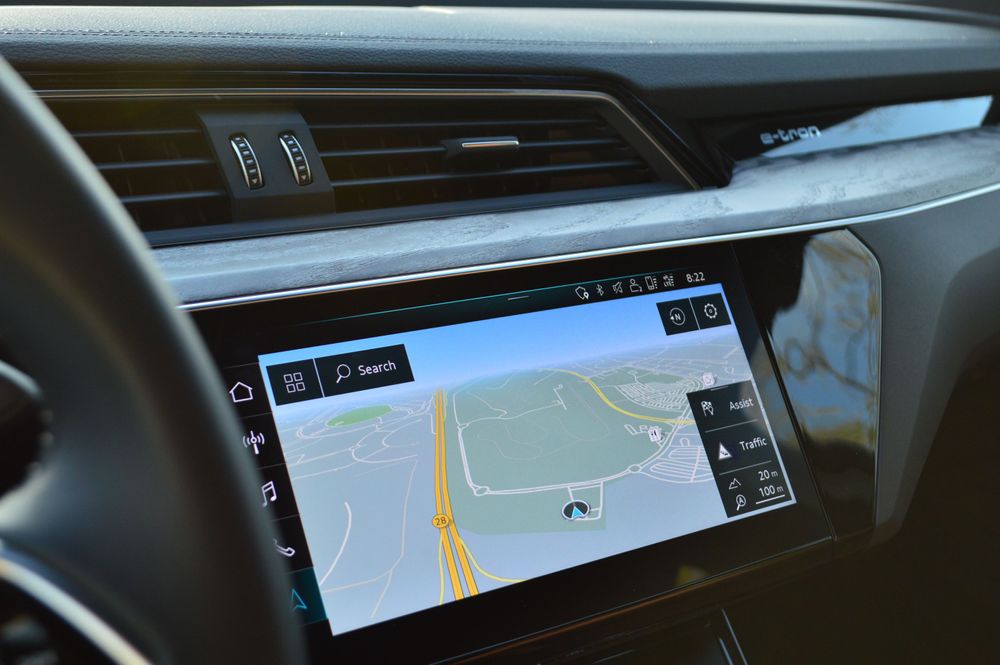 Being an Audi and a pretty high-tech one too, the e-tron Sportback has a long list of features. It’s got a panoramic roof, a wireless phone charger, satellite navigation, 360-degree cameras, and 3D parking, but none of those are likely to blow you away.

What will impress you are the virtual mirrors. Unlike a traditional Audi, the e-tron Sportback is fitted with cameras instead of side mirrors that relay your rearview onto screens inside the cabin. It’s unlike anything else out there and it is definitely one of the e-tron Sportback’s stand-out features. 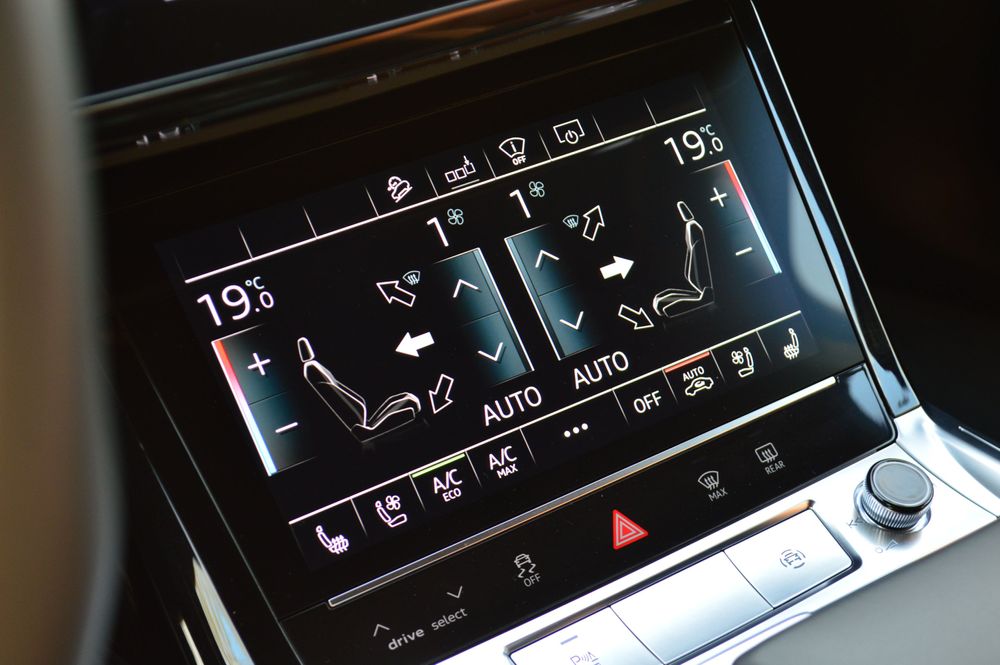 Something else that you can also brag to your friends about is the fact that the e-tron understands natural language and so you can pretty much have a conversation with it. If you say “I’m feeling hot”, it will drop the temperature of the A/C system. If you say “I’m hungry for Italian”, it will pull up a list of Italian restaurants near you. If you say “I want to go to the Address Hotel in Downtown Dubai”, it will start the navigation system for you. It’s great! 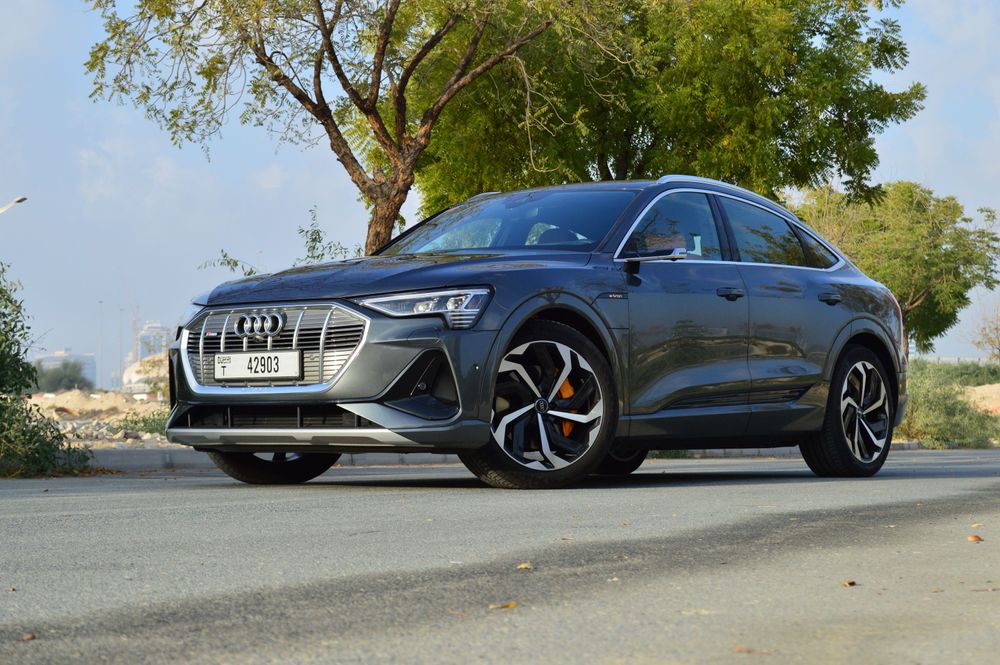 Sharing nearly the same length, width, and height as the Audi Q8, there isn’t much to differentiate the e-tron Sportback from its petrol-powered siblings, apart from the fact that it’s missing tailpipes, a fuel tank cap, and traditional side mirrors.

Those of you who are familiar with Audi design will notice the Single Frame Grille that makes its way onto all other Audi models, but here on the e-tron Sportback, it has been closed off for better aerodynamic efficiency. The 5 slats that have been left open in the middle are to help with battery cooling. 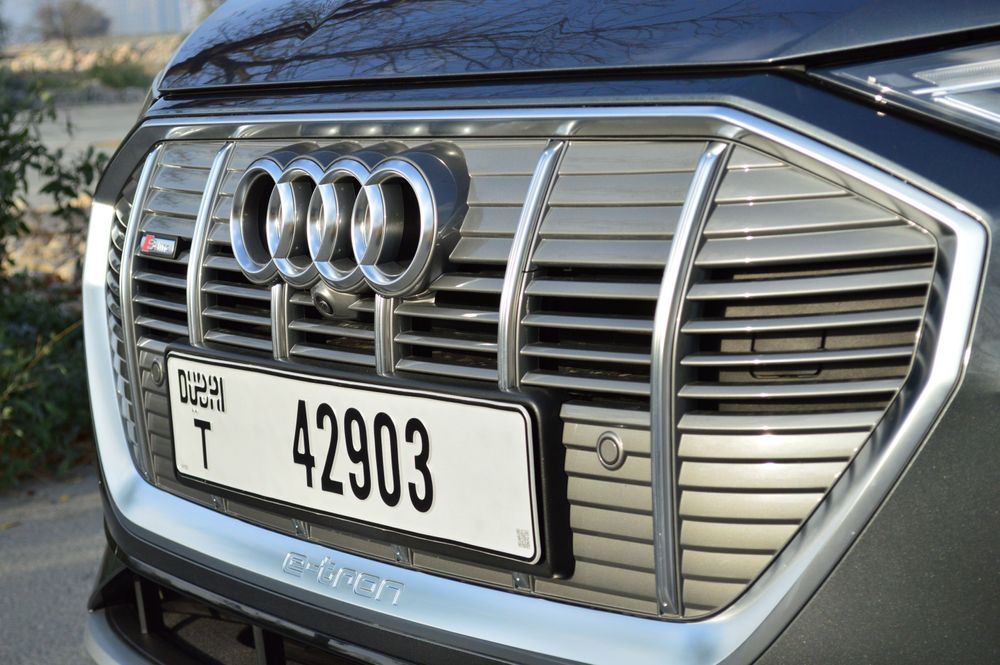 Along the sides, you are likely to notice the 20-inch alloy wheels that hide orange brake calipers behind them, the fastback or sloping roof design, and charging outlets on either side of the car. Now while some of you may think of it as having two petrol tank openings one on either side of your car, this wasn’t a mess up on the production line. The reason the e-tron Sportback has two charging outlets is so that whether you mount your home charging box on the left side or the right side of your garage wall, it will never be inconvenient.

At the back, the e-tron Sportback looks absolutely stunning and that’s because of a lip spoiler mounted on the boot lid, a full-length LED light strip, and an extremely broad stance that makes it look hunkered down and planted to the road. Boot space measures in at 615 liters but fold the seats down and you’re looking at a huge 1,655 liters of storage, not to forget the useful under-floor storage that it offers too. 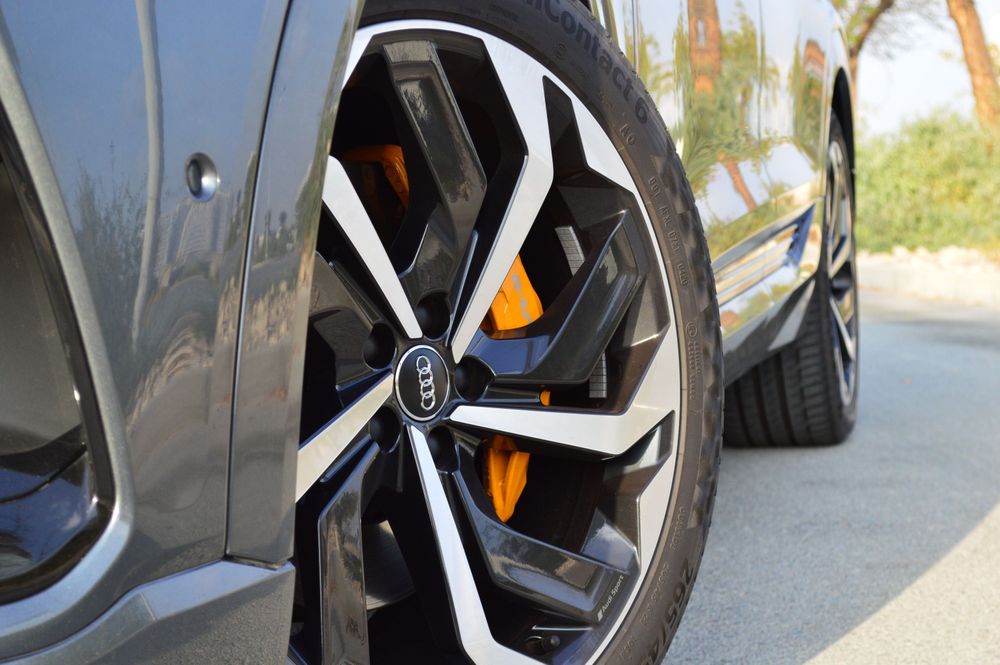 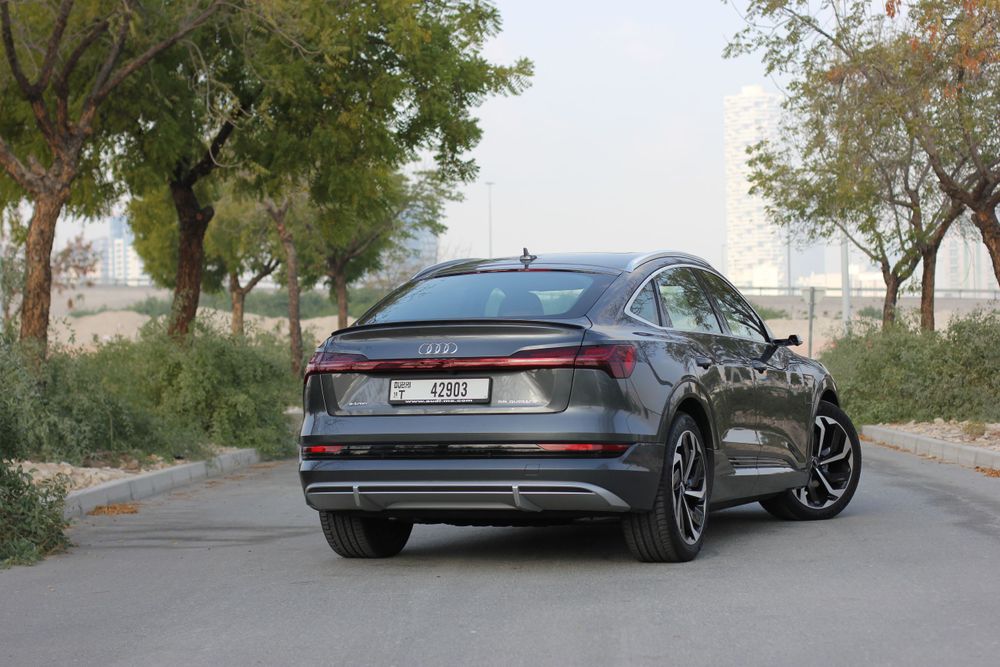 I said it before and I will say it again. The Audi e-tron Sportback looks like a normal Audi, it feels like a normal Audi, and it drives like a normal Audi. And let me be clear, that’s not a bad thing because Audi has made adopting the EV lifestyle as easy as possible. The real question, however, is that with an 8-year / 160,000-kilometer warranty on the battery and 440 electric vehicle chargers scattered around the UAE, are you willing to purchase an EV? If you are, then let InsuranceMarket.ae™ save you time and money, and get you the best car insurance quotes in the country.