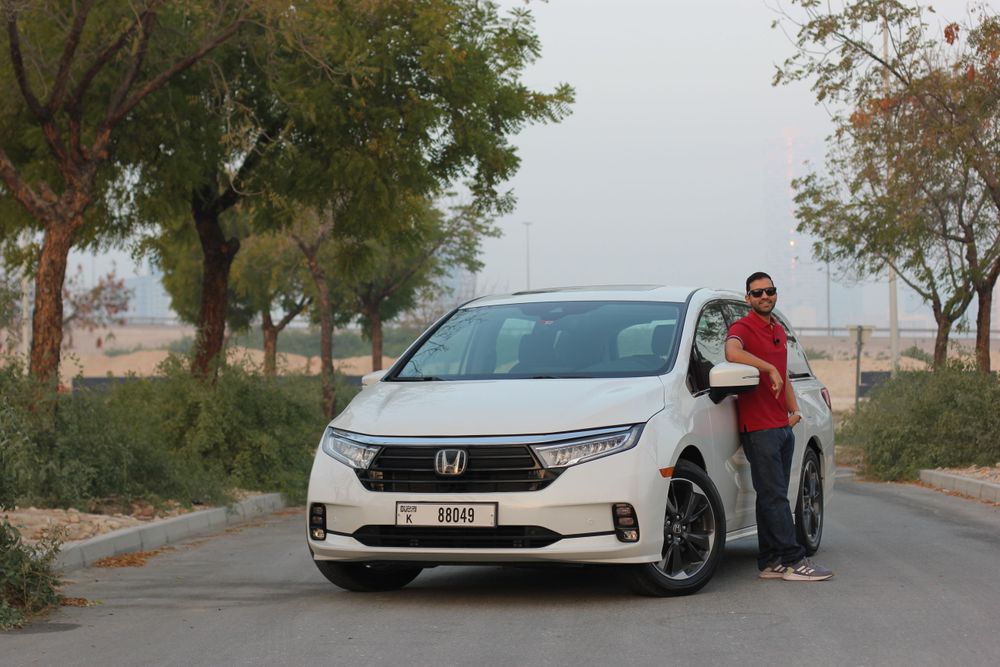 The 2021 Honda Odyssey is a thoroughly impressive minivan that costs 180,000 Dirhams and by the end of this review, I am going to try and prove why you should buy one of these over an SUV as your next family car. 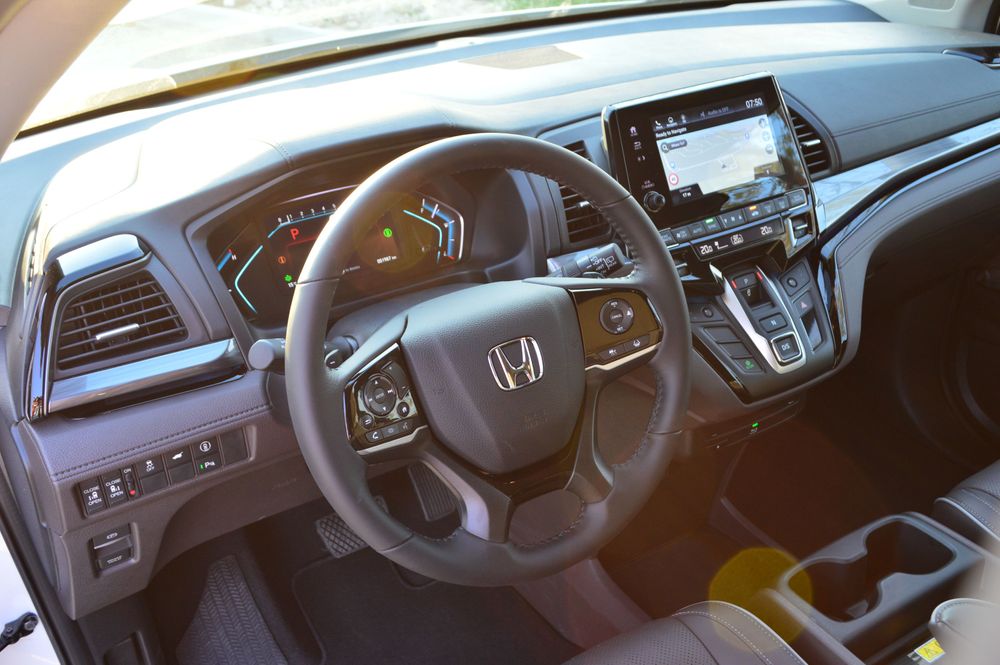 Now I know what some of you may be thinking, it is an Odyssey, there’s no way I’d ever buy one of those for my family. But what if I were to tell you that it’s actually fun to drive? Would you be interested? With a 3.5-liter V6 up front, the Odyssey offers 280 horsepower and 355 Nm of torque to play with it. What those numbers mean is that when you mash the accelerator pedal to the floor, it will wheel spin all through first gear, and since it is a high-revving Honda engine, it sounds weirdly good while doing it too. Yes, I’m talking about engine sound in a Honda Odyssey! But now let’s tone it down a notch and drive it the way it’s meant to be driven.

Although the Odyssey is a big car, (it’s nearly 10 inches longer than something like a Toyota Land Cruiser or a Nissan Patrol) it really doesn’t feel it. The visibility is great; the steering is light, making it very easy to drive and maneuver, and the suspension is extremely soft, flattening out any bumps or imperfections in the road. In addition to things like Active Noise Cancellation which makes the cabin quieter and more luxurious, the Odyssey is fitted with Honda Sensing – the brand’s suite of active and passive safety features. This includes Lane Keeping Assist, Road Departure Mitigation, Adaptive Cruise Control, Forward Collision-Avoidance, and Blind Spot Monitoring, all of which work together to make the Odyssey one of the safest cars you can currently go out and purchase. And hey, those aren’t just my words but also those of the Insurance Institute for Highway Safety (IIHS) as well. 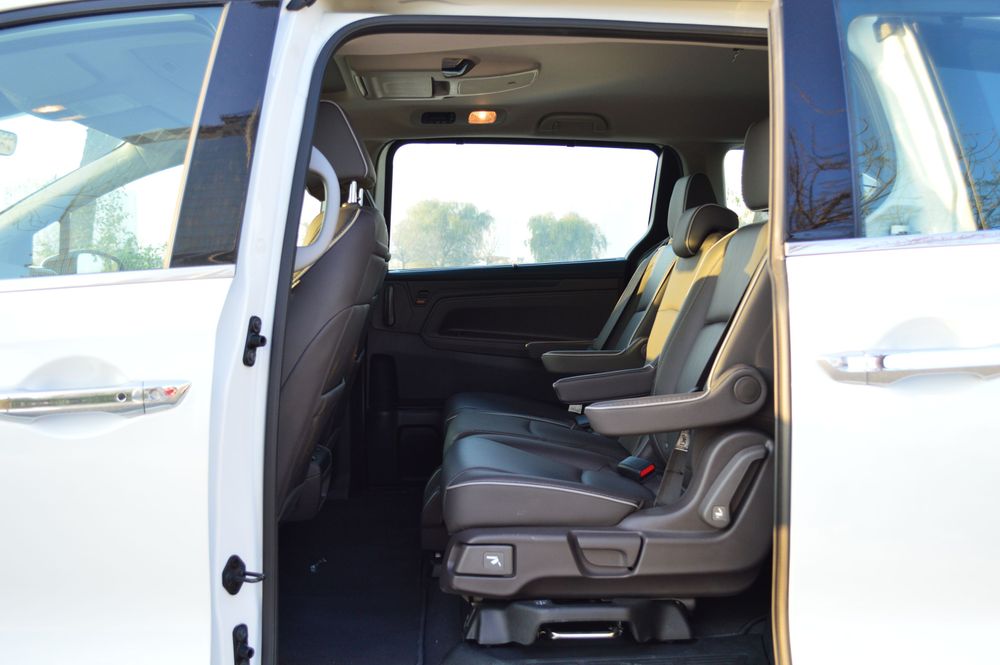 From a design perspective, Honda hasn’t changed much and that’s a good thing because the cabin of the Odyssey has always been spacious and practical. There’s a 7-inch screen in the instrument cluster, an 8-inch touch infotainment screen, and plenty of storage bins and cubby holes all around that have been made possible because of things such as a push-button gear selector as opposed to a traditional lever.

In the second row, there is plenty of headroom and legroom, a lot more than any SUV would be able to offer and to make sure those in the back are truly comfortable, the seats slide forward and backward as well as recline, and there are also privacy shades on either side, USB chargers, and a 10.2-inch entertainment screen overhead.

The last row in an SUV tends to be the place where you traditionally put children or people you don’t like very much, but that isn’t the case in the Honda Odyssey. With 38-inches of legroom, there’s plenty of space to fit 3 adults comfortably. There are also A/C vents, charging outlets, headphone jacks, and privacy shades on either side, it’s thoroughly impressive. 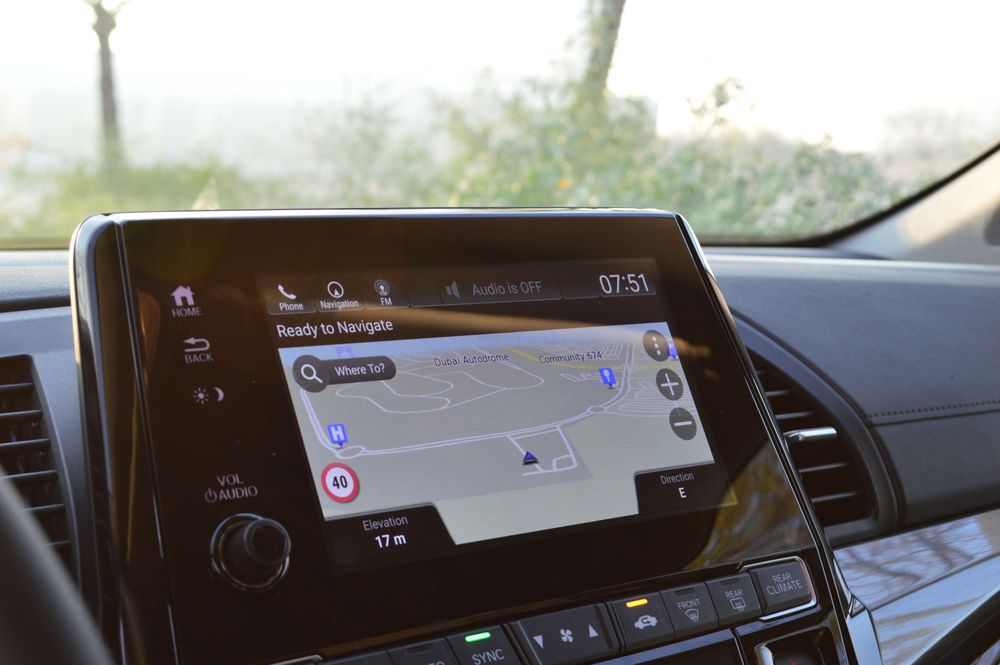 When it comes to features, Honda hasn’t held back and so it’s got everything from a sunroof to ventilated seats and a 10-speaker sound system to a wireless charger. There’s also Apple CarPlay and Android Auto, as well as a tri-zone climate control system, but don’t be impressed because that is not what really sets it apart.

Stand out feature number one. Most in-built navigation systems tend to be slow, laggy, and not particularly useful simply because of how outdated they are. That is not a problem in the Odyssey, since it is fitted with a Garmin navigation system. And of course if for some strange reason you don’t like the interface or simply aren’t used to it, you can always plug your phone in and use Google Maps on the screen. 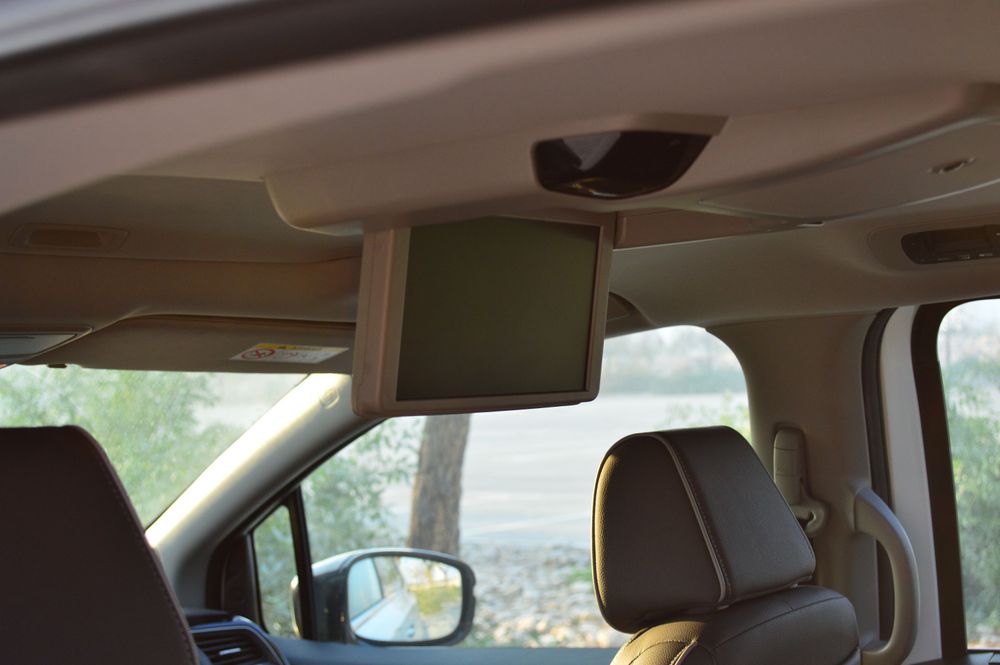 Stand out feature number two: Cabin Talk. Because of how large the Odyssey is, the engineers knew that having a conversation between the first and last row could prove challenging. What they’ve done then is added an in-car PA system. Switch the mic on and it carries the driver’s voice through the speakers to the second and third rows. It’s amazing because if your kids are watching a movie on the screen and have their wireless headphones on, it will override that too.

Stand out feature number three: Cabin Watch. A roof-mounted camera allows you to keep an eye on the back seats without having to keep turning around. It’s great if you have little kids in the back and the best part is that it has night vision so you can see clearly if it is dark outside and you can also individually zoom into any one of the seats. Now tell me, which SUV will give you all of that? 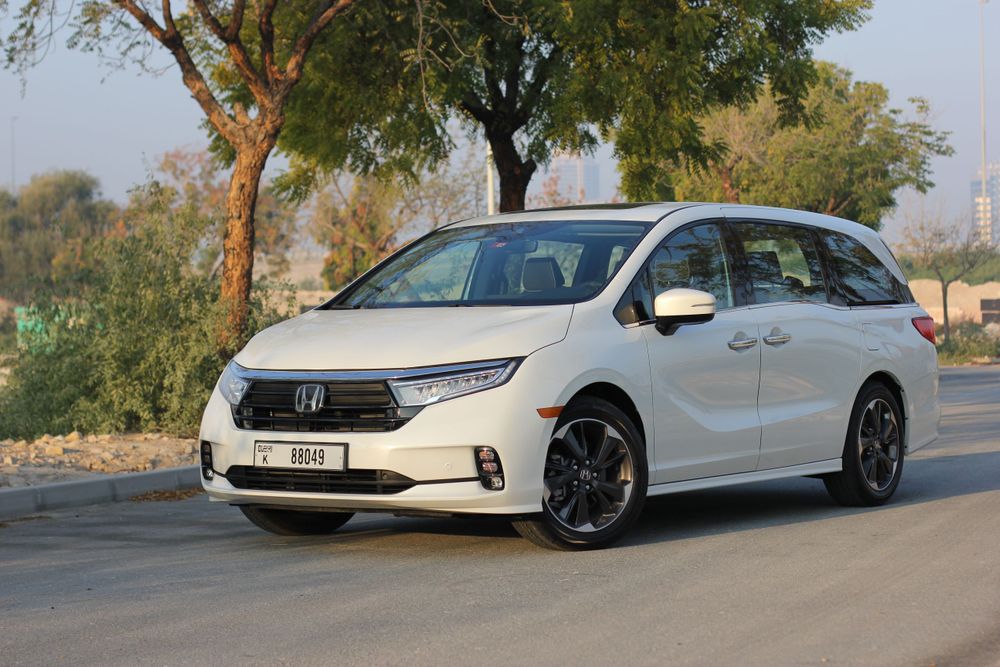 As part of its facelift, the Odyssey has got a new set of LED headlamps and fog lamps, a new grille, and a new bumper as well, but quite frankly, I’m not a big fan of it. I understand the designer have tried replicating the look and feel of the Accord and Civic with the sleek headlamps and chrome strip, but while those cars look good, the Odyssey just looks a little obese.

To clean up its appearance the designers have also hidden all the sensors for the adaptive cruise control system and forward collision mitigation system behind the glass-enclosed Honda logo. Since this is the full-option or Touring trim, it gets 19-inch alloy wheels and power sliding doors that can be controlled from the key fob.

At the back, it’s all quite familiar with the biggest change being the chrome strip that connects the tail lamps, is now black in color. The tailgate is height adjustable, meaning if you happen to have a low garage roof, you can set it to open half or three-quarters of the way instead of going all the way and boot space is absolutely massive. Even with all three rows of seats in use, there is plenty of storage but if you were to remove the second row and fold the third row flat, you’re looking at nearly 4,000 liters of storage space, which is more than what any SUV will be able to offer. 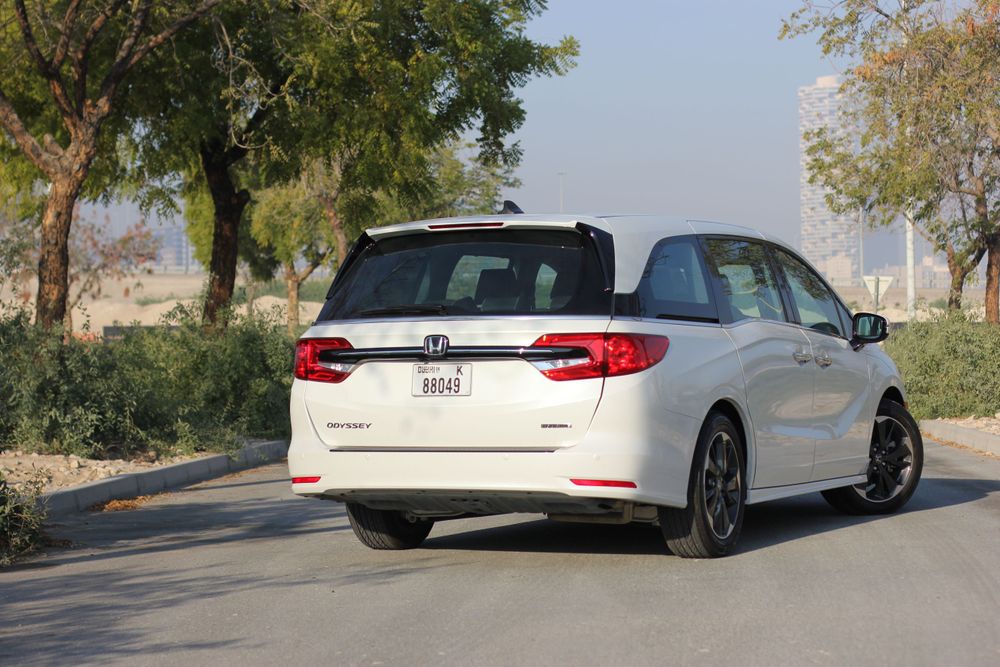 When most people want to purchase a family car, they go out and purchase a large SUV and in doing so, they end up paying for a lot of things they are never ever going to use, such as a four-wheel-drive system, locking differentials, and the list goes on. The Honda Odyssey on the other hand, with a starting price of 145,000 Dirhams and a full option price of 180,000 Dirhams is far more comfortable to transport a family, far safer to transport a family, and far more spacious to transport a family – not to forget all the cool tech that the Odyssey offers that no other SUV offers. So, is it time we started buying more minivans instead of SUVs as family cars? I sure seem to think so! Also, if you are on the lookout for the best car insurance deals in the country that will save you time and money, check out InsuranceMarket.ae™.