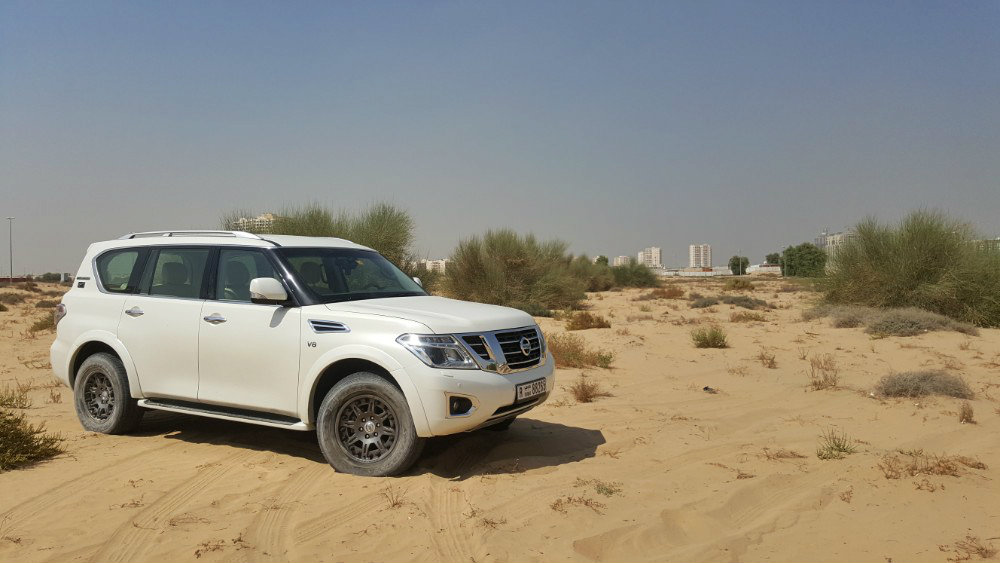 The Nissan Patrol has undoubtedly been the desert king for generations now, some will fight till the end of the earth saying it’s the Toyota Land Cruiser that is the biggest bruiser in the desert. Now Toyota fans should be slightly worried though, the reason for that? Nissan have teamed up with 13 time World Rally Championship winner Dr.Mohammed bin Sulayem and created something called the “Desert Edition”. The Patrol has been Nissan’s best seller in the Middle East for years and the reason for this is the Patrol has been the go to workhorse for locals and it has served them well for almost 65 years. Nissan did say only 200 Desert Editions will be made, but they might also sell kits for normal Patrols in the future.

The exterior of the car, at first glance, look the same as the current SE / LE Patrol, but after having a closer look we get flared arches over the wheels to improve the stance and aggression as well as the 18’’ beadlock wheels which not only look great but serve the purpose of that no matter how hard your hammer it across the desert, will never see the tire come off. 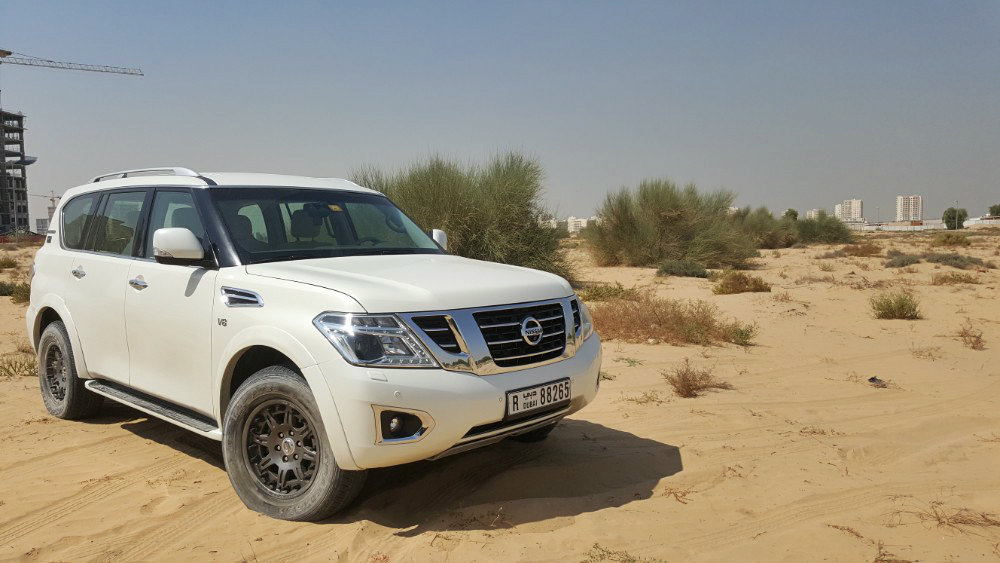 The Desert Edition also comes with large skid plates in the rear and front of the car protecting the vitals from boulders while you rock climb whatever obstacle is in your way. You also get a large desert flag hanging off the top of the car improving visibility for others while gliding in and out of the biggest dunes the Arabian desert has to offer. Other than that it’s the classic good looking Nissan Patrol features.

Where do I start, If I’m completely honest the interior is disappointing, with cloth seats and plastic panels that reek Nissan Sunny. That being said the seats are comfortable and big, providing a cinema seat feeling. 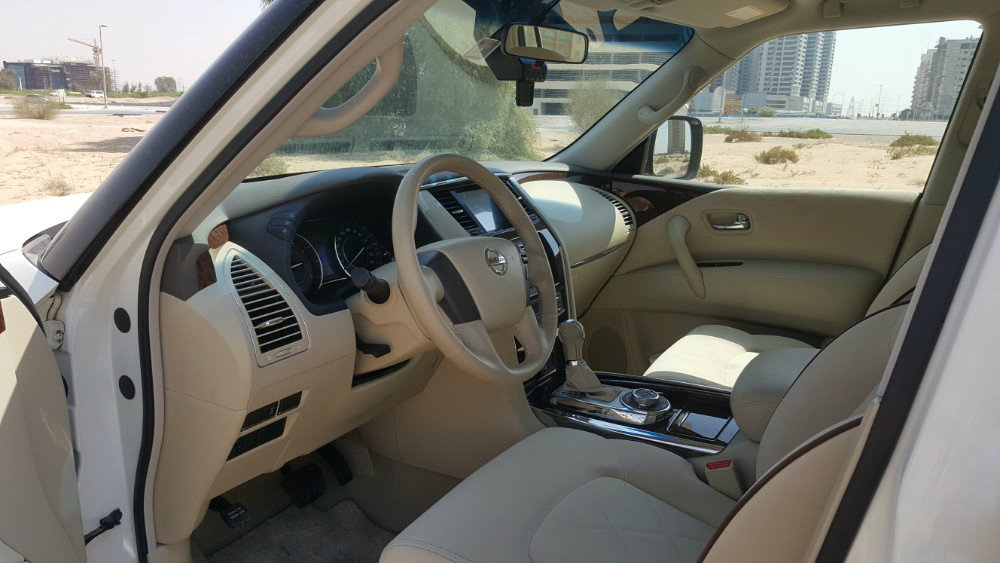 On a more positive note the cabin of the Patrol is very spacious with huge amounts of room for the front passengers as well as the 6 passengers you can get in the back, yes this car comfortably fits 8 people! 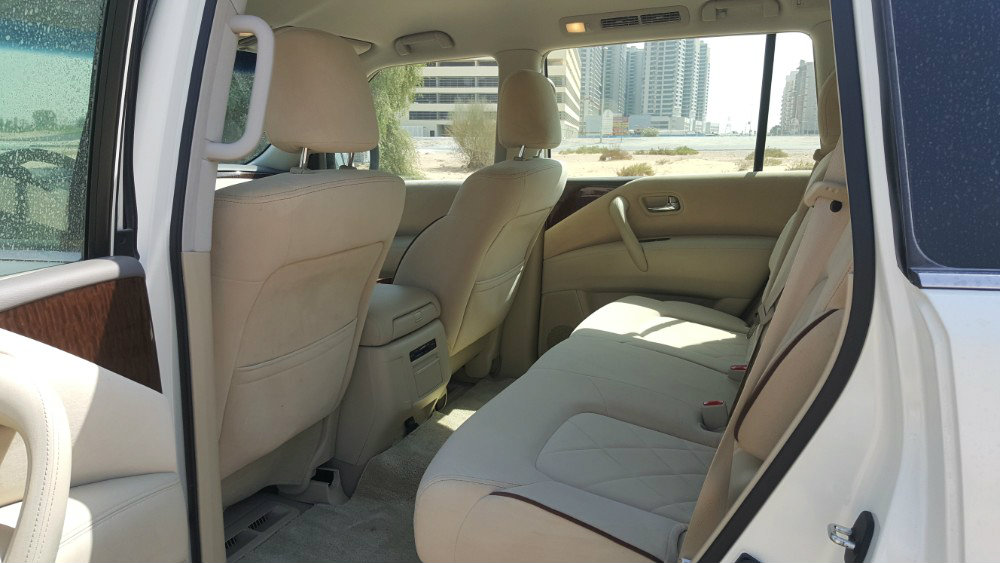 You also get floor level AC in the rear as well as 12 roof mounted A/C vents to keep all off-roading participants cool in the roaring hot desert. All three of the 2nd row cabin seats fold flat in case you need to consume half of Ikea, or all your friends and their camping gear.

The Patrol Desert Edition comes with a 6 SRS airbag system which provides the front passengers with front side mounted airbags and optional roof mounted curtain airbags. You also get visual and audible signals when the tire pressure is below the recommended PSI. The off road features include kinetic rope and sand ramps for recovery if you do manage to get stuck. 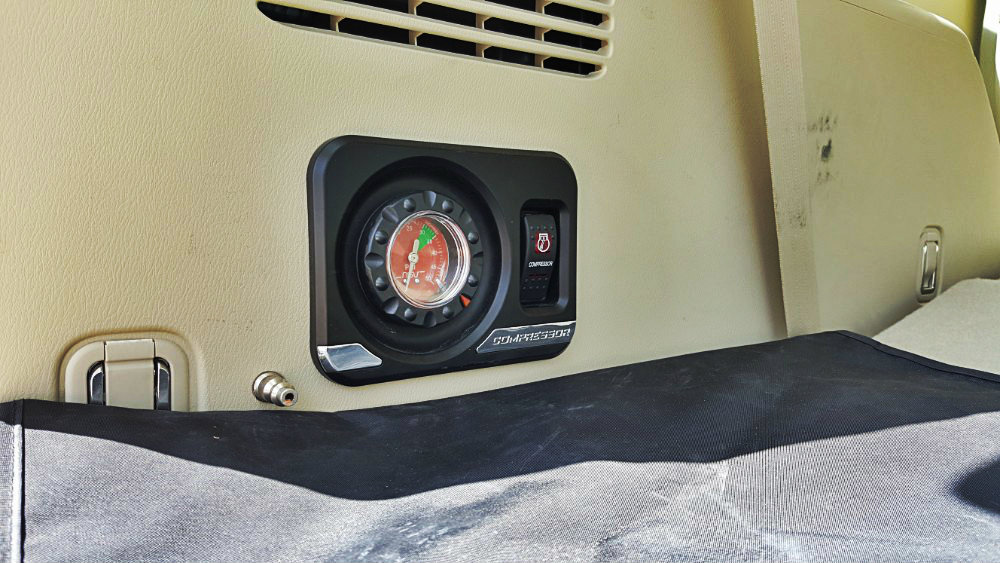 The Desert Edition includes an 8in infotainment screen with modern and up to date satellite navigation and Bluetooth so you can connect your phone and take calls or listen to music. You also get front and rear mounted cameras to help with parking this mammoth of a car in these tight Dubai Mall parking spots.

The Patrol Desert Edition with its over 5-meter length and nearly 2-meter height feels like a big car and it can be tricky to park or maneuver in tight spots. On road, the Nissan Patrol is comfortable and you do feel like you are in a luxury cruiser with bumps fading into the smallest nudge. Unfortunately, when you point the Desert Edition around a corner, it is immediately clear this car has been tailor made for the dunes. The stiff front suspension means there is no give around corners and if you put any throttle while trying to get around a bend you'll find the car wanting to go straight rather than the direction the wheel is pointing. Over the couple of days we tested the car, it did become fairly tiresome as a daily driver and I’ll be honest, the thought of taking another car to the mall was on the cards. 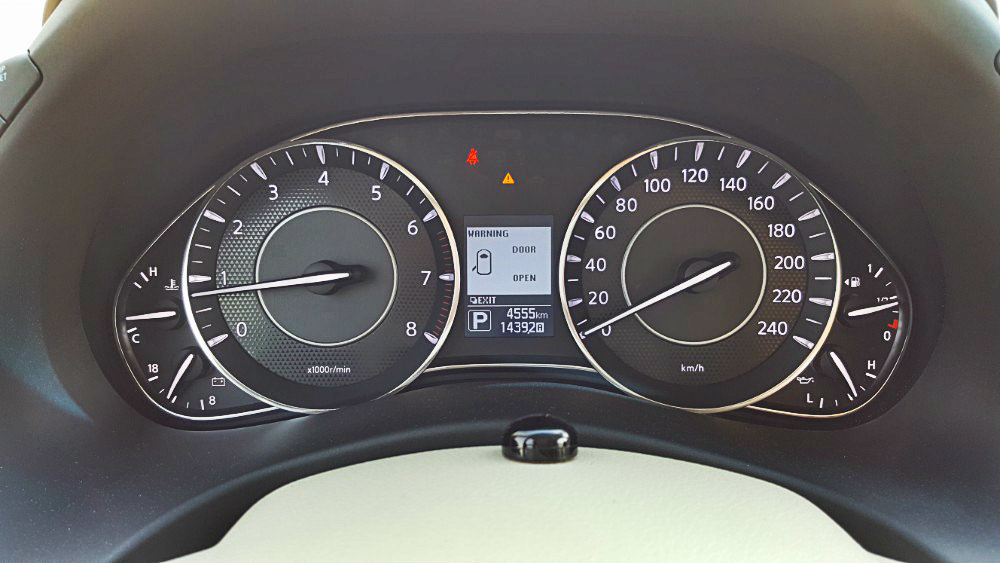 But then we pointed it towards the desert and that is when this car comes into its own, Wow. The Desert Edition is the most impressive off-road vehicle I have ever driven and I’ve been fortunate enough to drive some good ones. The clearance means seesawing becomes a thing of the past. The biggest difference between the Desert Edition and the normal Patrol is the desert suspension tuned by Dr.Mohammed bin Sulayem and with the locking differentials and high or low gear ratios means it's very difficult for the dessert to get a grip and bring you to a halt. Another fantastic feature unique to the Desert Edition is the interior mounted air compressor which allows you to lower the tire pressure without the worries of finding the closest petrol station and ruining the tires on the way there. 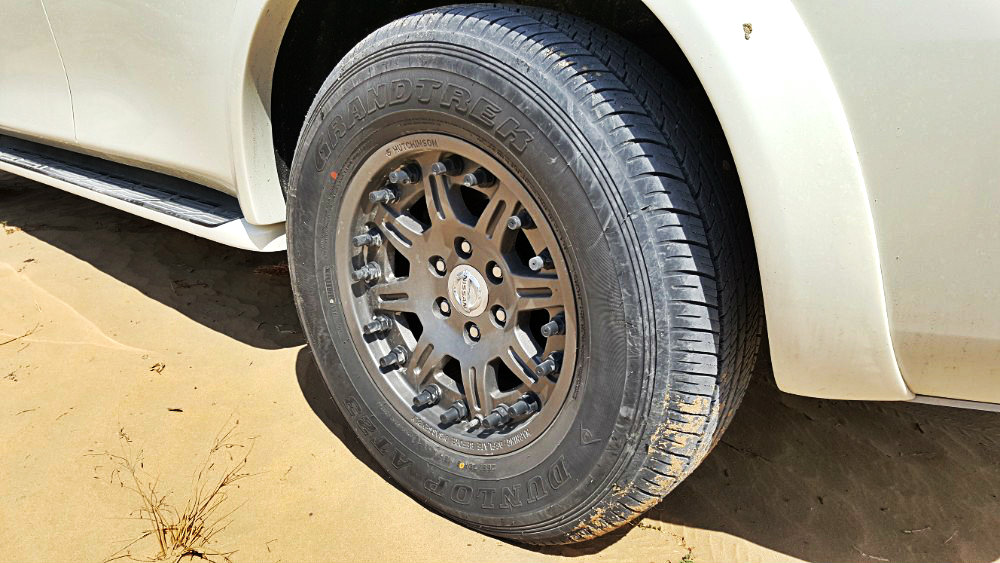 The Patrol Desert Edition is clearly apart from the standard vehicle and has been made for the off-roading enthusiast. Unfortunately, the on road capabilities hold the car back from a daily perspective. And cloth seats for the AED 250,000 price tag, is rather difficult to justify. 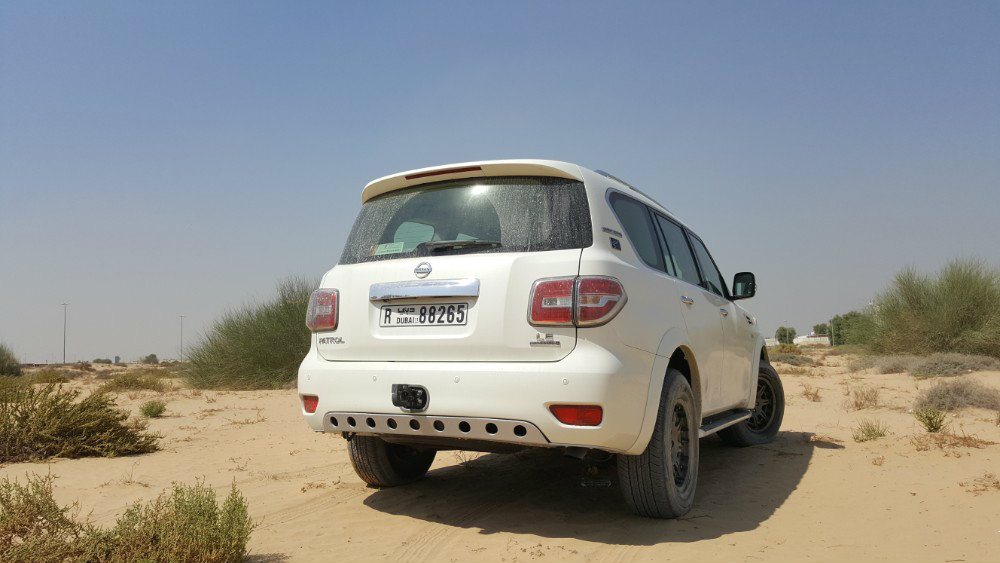 The 5.6L V8 provides more than enough power and torque for almost any scenario

Lacks stability on road due to stiff shock absorbers 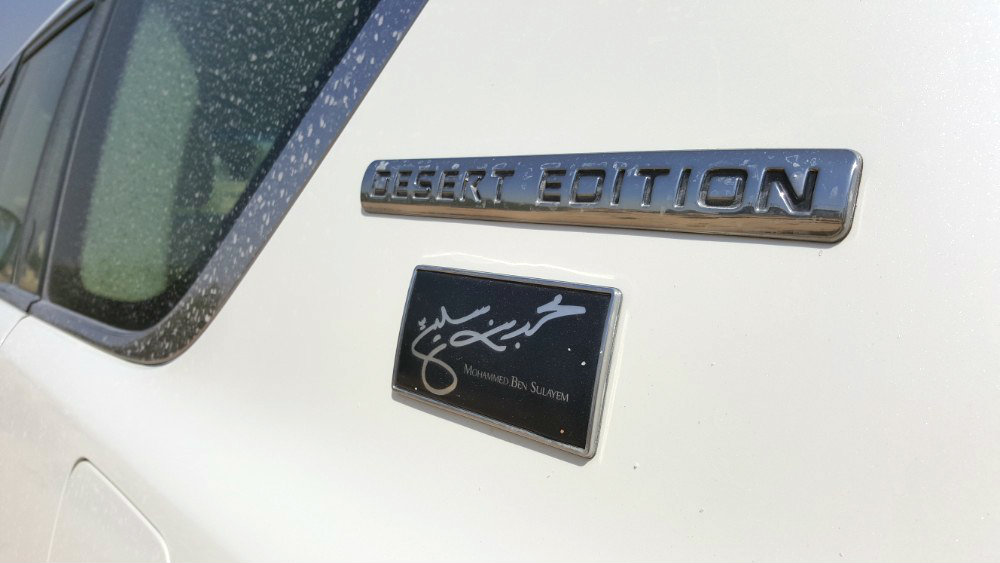