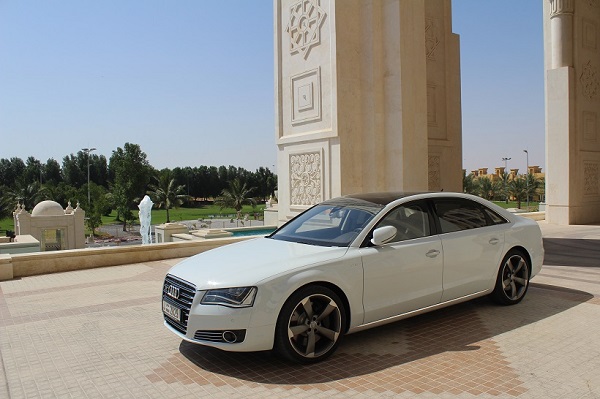 German engineering. Two words that somewhat define the luxury segment of the automobile industry. This segment is dominated by three goliaths: BMW with the magnificent 7 Series, Mercedes-Benz with the spectacular S Class, and Audi with the majestic A8. I had the privilege of driving the Audi A8 for a number of days, but it was not any A8, it was the Audi A8 L W12.

I was handed the keys, and headed to the parking lot, and the second I saw the Audi I was mesmerized. It looked amazing. The full LED headlights and the classic Audi grille gave it a very mean look while preserving its royalty. The car sat on enormous 21 inch wheels that complimented its enormous size. The “W12” Badges that are placed on all 4 sides of the car differentiate it from all other A8s. The white body combined with the 2 piece black panoramic roof blend together perfectly and give it a special luxury feel.

The A8 is equipped with smart entry system where the car unlocks when you place your hand underneath the door handle, and the car locks when you slide your hand on the sensor on the exterior of the handle. When you enter the A8, you are greeted by ridiculous amounts of leather on the dashboard, steering wheel, center console, and doors. If that was not enough, the Audi is also fitted with suede door inserts. This car has everything you need and some things that you don't! The Audi A8 is fitted with a Quad Zone A/C system that is easily the best A/C I have ever seen. Also, the Audi has cooled and heated seats both front and back, so you have the option of turning your seat into a block of ice (which is nice during the summer in this Middle East heat). All 4 seats can be adjusted to the occupant’s preferences with at least 8 different components that can each be controlled separately to suit your needs. If that was not enough, Audi has fitted all four seats with massage options!  Leg room in the back is vast, thanks to the extra 5 inches that are added for the L (long) wheelbase. 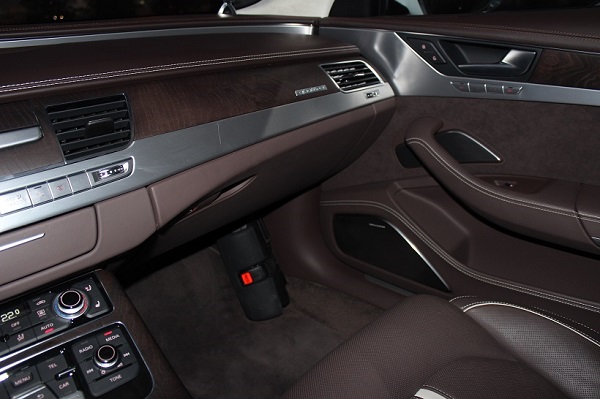 The A8 is jam-packed with technology; these are mostly gadgets that assist the driver in a number of different scenarios. The most impressive of all is the Audi Night vision, which is a button on the side of the steering column that you press which will activate an infrared camera fitted into the grille of the car which will locate objects that are located beyond the reach of the headlights. This feature will also give a visual and audio warning when such objects are detected. Second is the adaptive cruise control where the speed selected and distance from the car in front of you is determined, the car will automatically speed up and slow down to keep the same distance. Another driver assist feature is the Brake Assist; when the car detects that the gap between you and the car in front of you is decreasing at a rapid rate, the car will give off a warning to the driver, when the driver presses the brake pedal for an emergency stop, the car will apply full braking power in order to stop the car. The most fascinating gadget of all is the Lane Assist, where the car detects lane markings on the road and when the car wonders out of its lane, the driver will be notified of what is happening via steering wheel vibration. The car is also fitted with 6 cameras, 1 for each corner, one forward facing camera and one back up camera. And if that was not enough, the Audi has Blind Spot Indicators that will alert the driver if the way he is turning is not clear. In the media section of the car’s gadgetry, the car is fitted with an amazing Bang & Olfsen sound system which has 9 speakers, 3 sub-woofers and 2 tweeters that rise up from the dashboard. The clarity of this system was literally flawless! But when I compared it to the 2012 standard A6 sound system, the A6 system packed more of a punch when it came to bass pounding which was a real surprise. The Audi has a sim card slot where you can turn the car into a mobile Wi-Fi Hotspot and up to 8 devices can be supported at the same time. The rear passengers have a lot of fun in this car where they each have their own monitor and controls to their adjustable and massage seats, and what they want to see or hear. The Audi boasts so much gadgetry that I will need more time to explore each and every part and the review will be in the form of a book!

The Audi that we received had the fire-breathing W12 engine. This engine is a 6.3 liter engine that tamed 500 horses. The 0-100 time is a spine busting 4.7 seconds! The brakes on the Audi were 6-piston brakes which are used in the Porsche Cayenne; these brakes gave the Audi stopping distances that would give sports cars a run for their money. Given the fact that the A8 is run by more like a power plant than an engine, fuel economy was ridiculous, the best on the highway was 16.7 L/100KM and in the city it averaged at 27.4 L/100KM. I highly doubt that anyone buying a half a million dirham car would care about how much it will cost him to fuel it. Performance wise the Audi was immaculate, it handled excellently, the steering wheel was electric so the cruise ship can be maneuvered easily, and most importantly, the engine delivers power that would rip apart the tarmac!

The Audi A8 is simply magnificent. It demands respect on the street, people would stop their cars just so you can pass. The drive is immaculate and very, very smooth. The price tag of this particular A8 is a whopping 520,000 AED. The price is rather bloated for what you get with the car. Nevertheless, it is an absolute treat to drive.