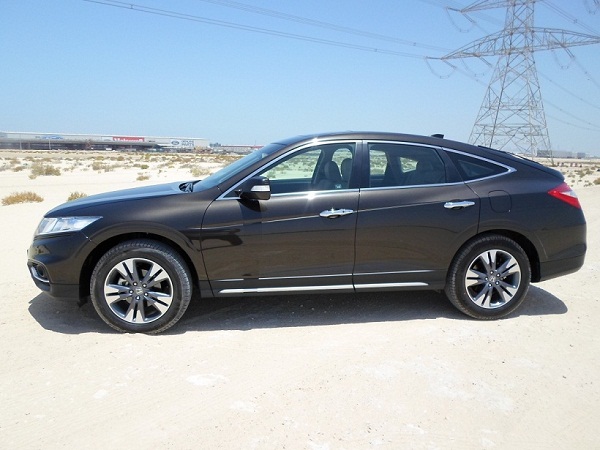 It was a warm Monday morning as I made my way to the isolated Honda office deep into the Jebel Ali Free Zone. With a map in my left hand, an A/C that refused to work and very few people to possibly ask for directions, a few wrong turns and a few right turns later, I had finally arrived. The extremely friendly and helpful staff handed over the keys to the Kona Coffee Metallic 2013 Crosstour Touring and I was off!

Though the 2013 Crosstour is a MMC (Minimalistic Model Change) from the previous model, the new Crosstour receives new bumpers, a new grille and some very nice looking 18” grey and silver rims wrapped in Michelin rubber. Having noticed these small changes, the new Crosstour was already starting to look a whole lot better than the previous model. However, I was saddened not to find the stunning LED daytime running lights that adorn the front of the Accord Sedan and Accord Coupe on the Crosstour. 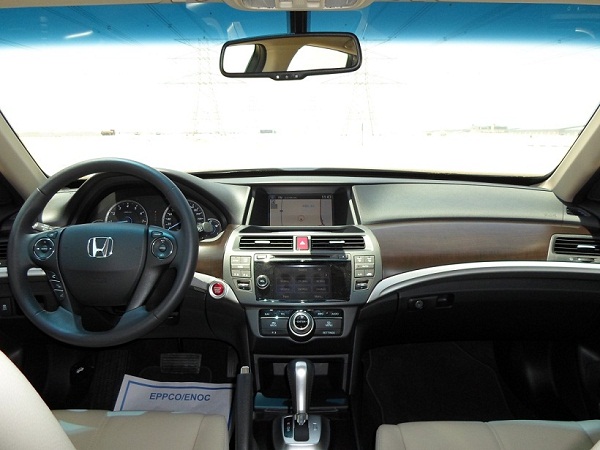 Upon taking a seat in the cool and comfy cabin, I noticed something. Elements from the bulgy dashboard found in the previous generation Accord were combined with dual screens such as in the new generation Accord, to give birth to the dashboard of the 2013 Crosstour. Though I was never a fan of the bulging dashboard in the Accord, it seemed a lot nicer in the wider and roomier Crosstour.

Wood inserts on the dashboard and along the leather wrapped gear shifter surely added a nice luxurious touch to the interior. If you love your music more than anything, the Crosstour has you covered since there are 8 sources including USB, iPod, Bluetooth, AUX and HDD to name a few from which you may play your tunes.

Boot space with the rear seats up is impressive, however if you have to make a trip to Ikea, a simple tug of a lever in the boot and the rear seats fold down instantly revealing a whopping 1444 litres of boot space. Another feature I really loved about the boot was that since all the panels are reversible, you could flip it over from the carpeted side to the hard plastic side when visiting the beach which would make cleaning up a whole lot easier when you’re done!

On the downside, it was a little strange driving a car that came equipped with a reverse camera but no parking sensors. However, the fact that there was no trunk release button from the inside of the vehicle was a whole lot stranger. The main let down for me with the interior though was the blind spot camera and tilting side mirror being installed on only the passenger side, something I had previously encountered in the Honda Accord Coupe. Lastly, though the spoiler looks good on the Crosstour, it does restrict rearward visibility to an extent.

On the performance front, the Crosstour is equipped with a 3.5 litre V6 engine that produces an impressive 278 horsepower and 252 Nm of torque. Since the engine is fitted with VCM (Variable Cylinder Management), based on your driving style it automatically lights up a small ECO light in the instrument cluster and deactivates two to three cylinders in order to maximize fuel efficiency. Don’t be fooled though, when you put your right foot down the acceleration is quick and the engine will rev all the way up to an impressive 6,600 RPM before shifting cogs.

Since the Crosstour has a very light steering it is easy to control at low speeds, however when taking turns at anything above 80 KM/H there is almost very little to no feedback from the steering wheel which doesn’t give the driver the confidence to throw the car into a turn at high speeds which is a shame since the suspension is tuned brilliantly. Having completed a few high speed stops, there was a noticeable fade in the braking power. In all fairness though, this car wasn’t made to be driven hard. Lastly, although the badge on the rear claimed it was a 4x4, not being able to engage low range gears and never hearing of a Crosstour going off-road, I was a bit skeptical about going deep off the beaten path.

All in all then, the Crosstour is a very roomy, comfortable and practical car to drive around town. Although I’m not a big fan of the looks, I did enjoy driving the car and would surely recommend it to anyone looking into buying a car with a little extra practicality.