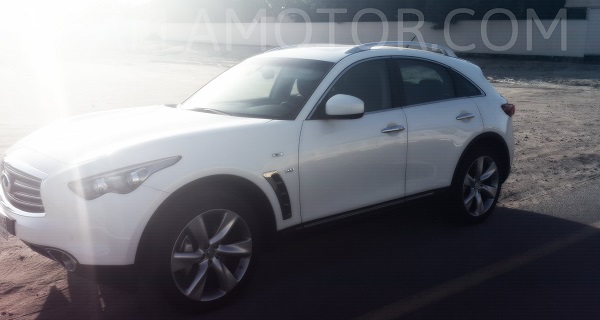 This weekend I had the pleasure of driving a redesigned, rebranded and reborn 5.0L V8 beast which goes by the name of Infiniti QX70 S. It is essentially a rebranding of the previous FX, so when I said new kid, technically I lied. However, this rebirth has resulted in very noticeable improvements. For all intents and purposes, it can be considered an all new entrant to the market. The QX 70 comes in two variants; 3.7 liter V6 and the 'S' version which we tested. How does it fare among the current crop of luxury crossovers? Let's find out... 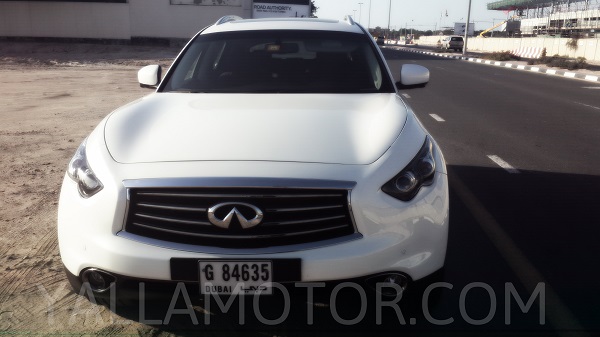 Although they do say beauty is in the eye of the beholder, I don’t believe there will be many who will disagree when I say this is a good looking machine. It has managed to shake off the bulky SUV-esque styling that seems to continue with it's key competitors, the 2014 BMW X5 50i and the Mercedes ML 500.

The exterior is curvy and coupe-like in nature with a mean looking front grill that adds a distinct persona to it. A stretched out hood, low roof, sleek design, creative head and a few little touches like the side grill, all contribute to shifting the car away from the utility vehicle and closer to the coupe spectrum of styling.

I love the 21 inch wheels, they add lots of character. LED taillights, HID bi-Xenon headlights, chrome exhaust tips all add to the sporty look missed out by the aforementioned German rivals. 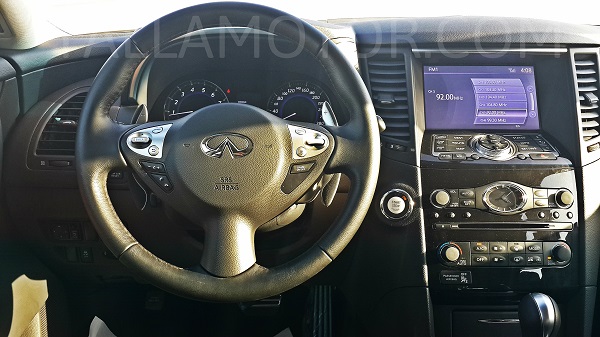 The interior is the trickiest portion of this particular vehicle and here’s why: On first impression, it is plush with fine quilted leather and wood trims in door panels and lower centre console. This is combined with generous legroom in the front seats, making it cozy, yet classy.

However, on deeper inspection, the front dash felt a little less refined, not in line with the rest of the interior quality. The centre console for me, was much too cluttered. Also, there is relatively less legroom in the backseat, compared to what some of the other crossovers can offer. The unique styling of the Infiniti QX70 S reduces headroom as well. Although I do appreciate the design of this creative crossover, I guess it is basic physics that a lower car with a lower roofline will compromise headroom inside the cabin. Essentially, if you are tall and lanky, the headroom might be something you want to look out for on the test drive. Again, not a very significant issue, but one worth mentioning.

This is also not the quietest cabin in it's class. And I don’t mean the beautiful chorus of the V8, I mean the road noise. Although, it wasn’t unbearably loud, it is something you wouldn’t expect in a car of this level.

Having said that, these faults are minor in my opinion. After spending my weekend driving around, I can safely say it is a good place to be in. It's very comfortable and the whole package considered, very pleasant to look at on the inside. 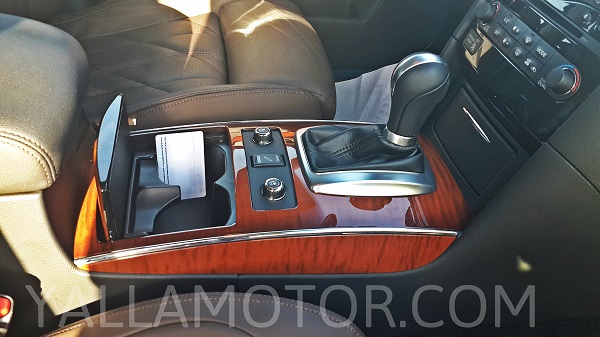 In terms of technology, the QX70 S comes with all the conveniences you can expect to find in such a vehicle. Bluetooth phone connection, Sat Nav, multiple CD changers all came in our full options model.

One of the key value added features here is the intelligent cruise control system. Basically, once a cruise control speed is set, the car takes over the braking and the acceleration based on the speed of the vehicle in front, slowing down and speeding up according to the speed of the traffic while you sit back with your hands on the wheel. It just makes the long Sheikh Zayed Road commutes a little bit more relaxing.

The other features worth mentioning are the parking assist cameras.  They are indeed very helpful, providing a bird’s eye view, thus helping one to park forwards or backwards if need be, with clear line markings on the camera, so even the clumsier ones can park with ease. Finally, the QX70 S also comes standard with a 9.3GB music box hard drive to store your music directly in the car, which is enough space to allow for a significantly large supply of music.

In terms of safety, the intelligent cruise control system goes some way to the prevention of incidents on the highway, as it can even bring the car to a complete stop in line with traffic if need be. In addition, the car is loaded with airbags including dual-stage supplemental front air bags with seat belt and occupant classification sensors. In addition, there are driver and front-passenger front seat-mounted side-impact supplemental and roof-mounted curtain side-impact supplemental air bags with rollover sensor for front and rear-seat outboard occupant head protection as well.

The 4 wheel ABS comes as standard, as with most cars nowadays, with brake assist and zone body construction with reinforced passenger compartment and front and rear crumple zones. In short, it ticks all major safety boxes and then some. 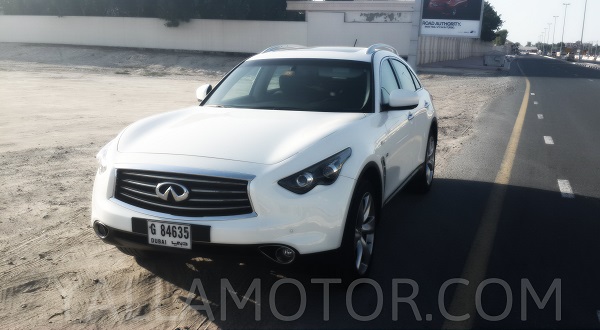 This, if the QX70 S ever needed, would be its redeeming feature. The 5.0 litre V8 beast that I drove was capable of generating 390bhp at 6,500 RPM, which is very attainable. The torque peaks with 500 Nm  at 4,400 RPM. Just for a frame of reference, a Mustang GT generates 420bhp and 390Nm of torque, and that is a performance vehicle. Yes, it is lighter, much faster than the QX70 S, but it shows how impressive the QX70 S really is.

It is hard to describe how at home this car is when it is asked to perform. The 390 horses can take you from 0-100 in 6 seconds, which in terms of everyday life can make overtaking so much easier. The reason I compared the stats with the Mustang above, is because the car gives you that muscle car feeling. It has the raw power, the blistering acceleration (at least for a crossover), the throaty roar of the V8 and the overall responsiveness of the throttle, no matter what your speed.

It is a not a light car by any stretch of imagination, weighing in at just over 2.1 tons. I have to say it feels much lighter and nimbler than its weight would suggest, and with the sport mode enabled, the bar for fun is raised even higher.

It is not just power, the QX70 S also manages to handle curbs like a low riding coupe. Curvy, narrow inner roads were a cakewalk and going quick around corners is not at all frightening as it can be for certain vehicles in this category. The low ride height and the 21 inch rims are a contributing factor to the improved handling. The suspension is firm and steering is also a bit chunky, perhaps a little on the harder side for some which allows you to feel the road. The traction control system however is very clever, which, given the power that is generated, is a blessing.

The relaunch has given the QX70 S a new chance to prove itself in this very competitive crossover category. At around 280,000 AED ($76,300 USD) it is cheaper than most of its German competitors. Although space is a slight drawback, particularly rear legroom and space in the boot, it is sufficient for most average families. If you are someone who is looking for a vehicle that offers utility to an extent, comfort, a tinge of a classy interior and a drive that could trump even some coupes, I would recommend giving this car a chance with a test drive.