Which are the most popular NEW CARS by online searches in the region? 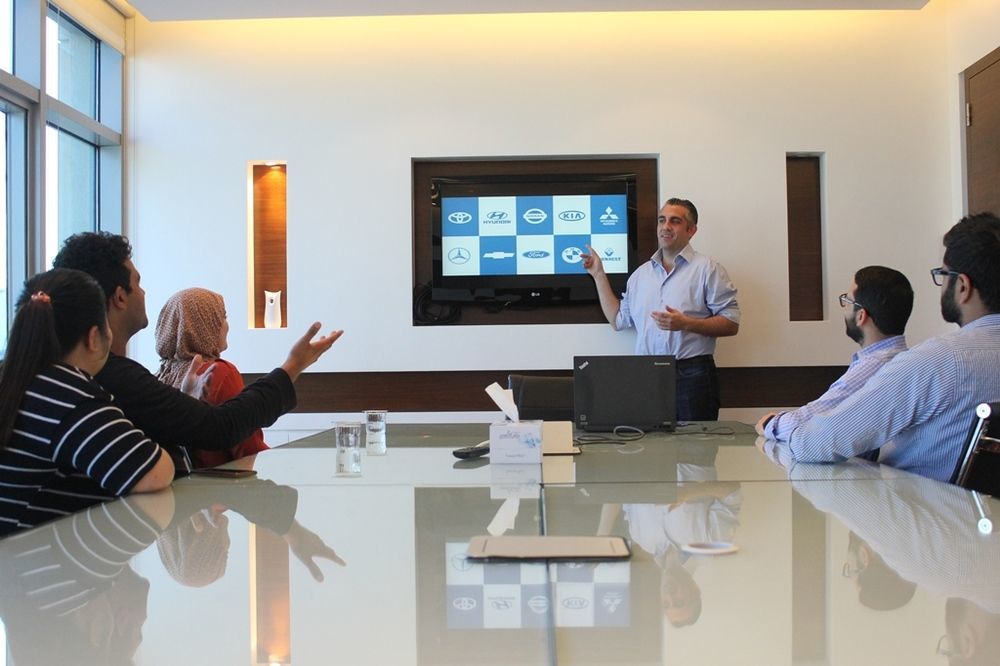 At YallaMotor, we understand that bringing transparency to a market that lacks a bit of it, is our mission. It is the reason we wake up every morning and that is why we are highly committed to delivering reliable and up-to-date information to every single PC, laptop, tablet, mobile phone, smart TV, and every other device our users access us from. We pride ourselves on providing the most relevant information to empower buyers and sellers make the most cost-effective buying/selling decisions and we wouldn’t have it any other way.

Over the last 3 months, we’ve garnered more than 4,000,000 sessions that generated in excess of 18,000,000 pageviews. Since it's difficult (just for not saying impossible) to get reliable new cars sales information, we understand that our audience is deep enough to get solid conclusions. We understand 4,000,000 sessions is a solid sample, hence we analyze and share our data. Brands that were able to get the most sessions and pageviews out of that number, are the most popular, at least in the online world.

Below you will find the ten most popular new car brands across the GCC and the five most popular models from the three most popular brands. The data has been pulled from YallaMotor Google Analytics using the period from 20/11/2017 until 20/02/2018, and like always I am proud to say that our figures are public, you can always cross check them on site such as SimilarWeb. If you need more information, feel free to contact me directly, my email is at the bottom of this article. 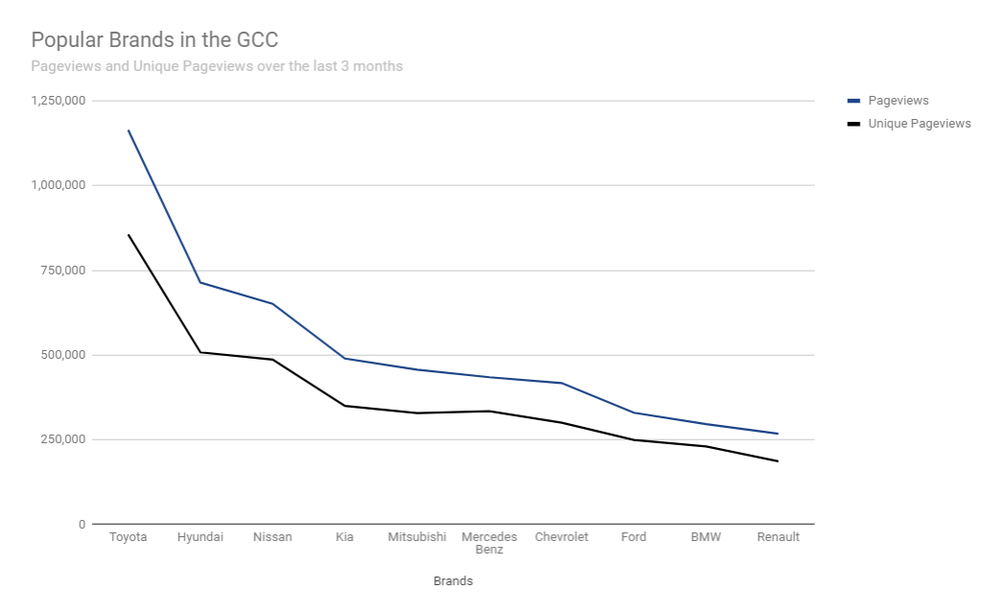 Toyota’s leadership in the GCC is a clear one. Out of the total 5,219,145 pageviews that the top 10 brands gathered over the last three months, Toyota stands at a dominating 22.29% with a whopping 1,163,720 pageviews. Second position is occupied by a surprising contender, with Hyundai raking in 13.67% equating to an impressive 713,531 pageviews. And in a very, very close third position stands Nissan waving its bronze medal and capturing 12.48% or 651,349 pageviews. Will Hyundai be able to maintain second position in the next quarter, and what will Nissan have in store to get closer to its historic rival Toyota? 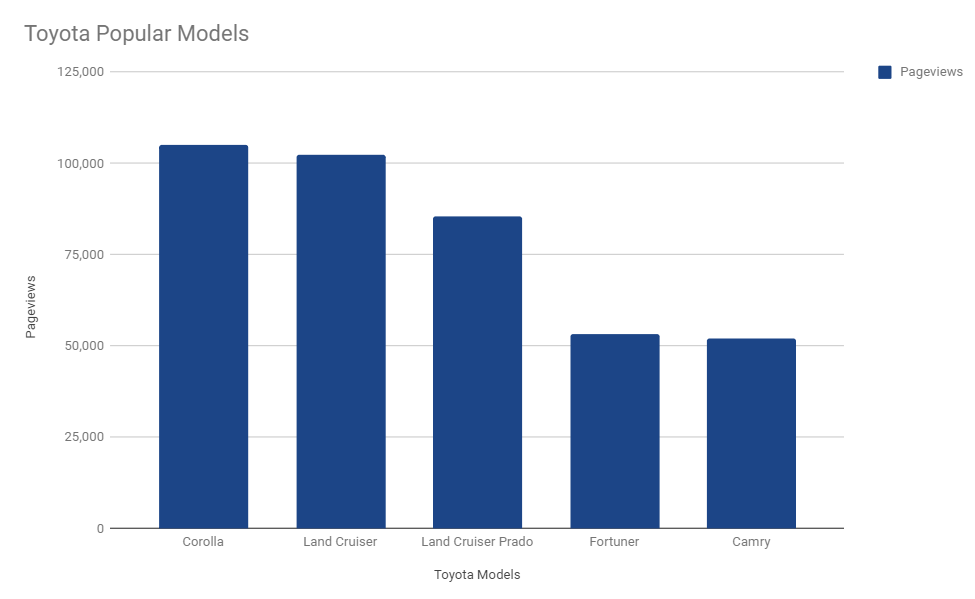 Part of the top 10 brands in the GCC are also two premium manufacturers hailing from Germany (BMW and Mercedes-Benz), but you should have already expected that since it is the GCC after all. As far as rankings go, Mercedes-Benz comes in sixth position with BMW trailing behind at eighth position. To put figures on the table, Mercedes-Benz gathered 138,343 more pageviews than BMW did during the same three-month period. 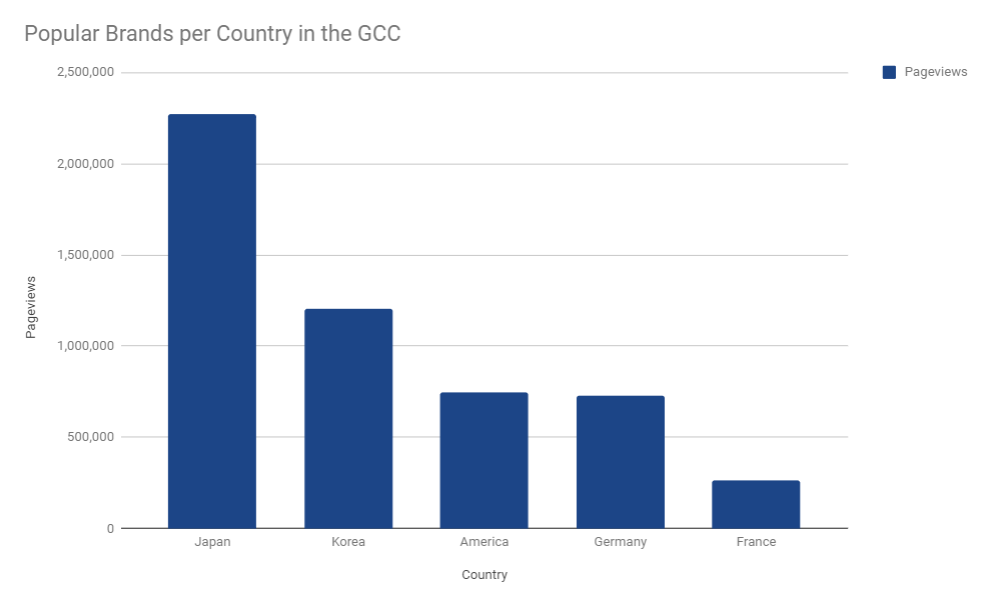 When it comes to market share under the top 10 brands with regards to a country-specific breakdown, Japan with its reliability, durability and unwavering resale value rules the charts with over 2,200,000 pageviews. In a distant second comes Korea with a shocking 1,000,000 fewer pageviews. The interesting battle, however, is between the Americans and the Germans, with some mere thousands separating them.

Zooming in to a micro level and focusing on models, the Toyota Corolla (which is the brand’s most popular model) raked in 105,004 pageviews which to put into perspective, is far greater than the Hyundai Elantra at 73,225 pageviews and the Nissan Sunny at 48,059 pageviews. Comparing larger sedans, such as the Camry with the Altima, also reveals a shocking difference of 31,229 pageviews, as the Camry stands at 52,203 and the Altima at a significantly lower 20,904. With SUVs (and this is the most interesting one) we see a sizeable difference between the Toyota Land Cruiser and the Nissan Patrol, with the Land Cruiser leading the way at 102,284 pageviews and the Patrol falling back at 81,249 pageviews. 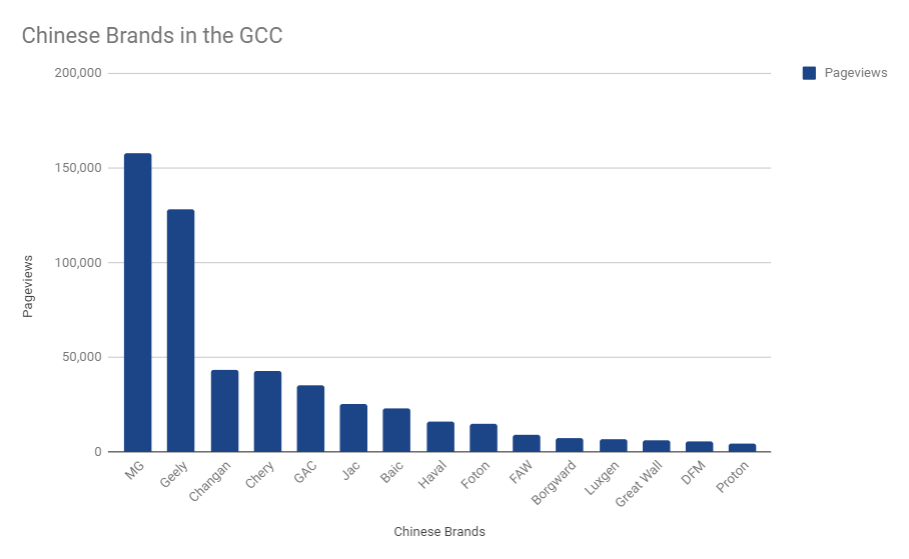 Now given we have two Korean brands in the top 10 list, how long do you reckon it’ll be before the Chinese brands begin to make an impact in the region? To some extent, they have already begun shaking some trees. Hence, the below bonus track. Between the 15 Chinese brands that operate across the GCC and Egypt, they generated 525,396 pageviews during the last 3 months, which in my opinion, is not bad at all. MG seems to be the leader, however, I'll bet on Geely since MG benefited from an unexpected spike due to an aggressive launch in Saudi Arabia and then went flat, whereas Geely has maintained steady momentum day after day. 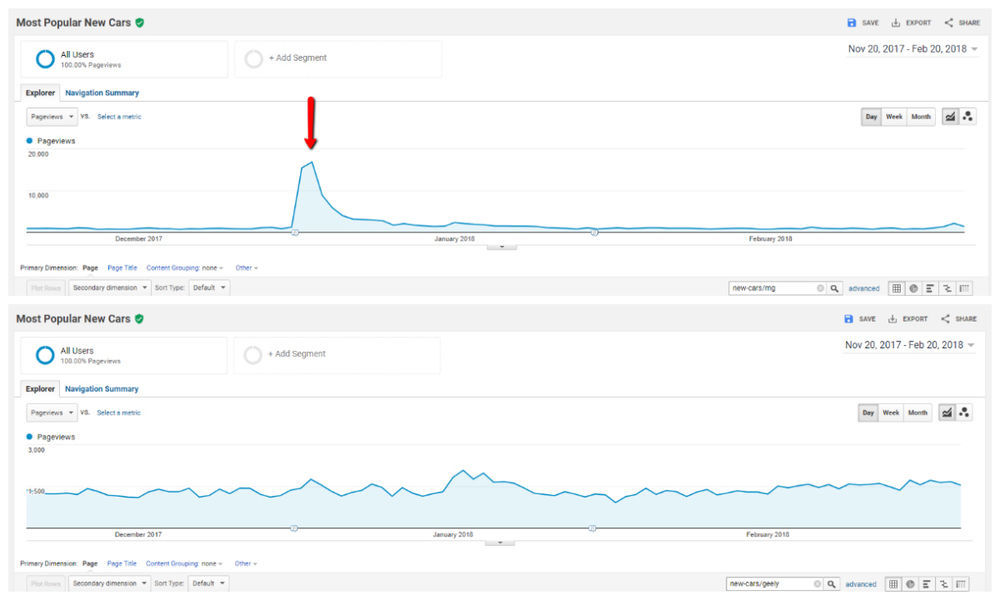