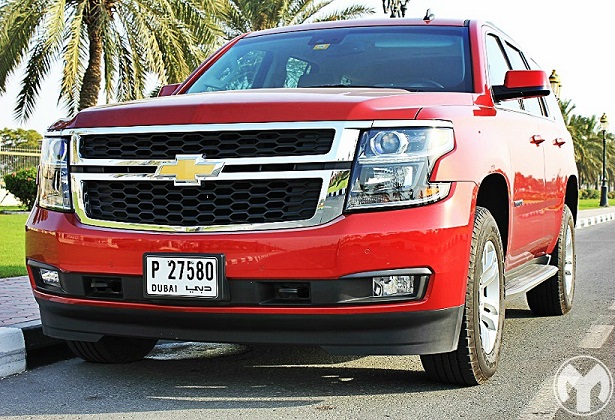 Continuing with our GM ‘fiesta’, this week I received another big brute – the mighty all-new 2015 Chevrolet Tahoe. The Tahoe is one of Chevrolet’s main success stories and accounts for 50 percent of SUV sales (including the GMC cousin – the Yukon) in the US. Here in UAE as well, this SUV is pretty common as people with big families want a vehicle which can carry children and is not as tame as an MPV. The previous generation is immensely popular on the roads and so this new gen has a lot to live up to. 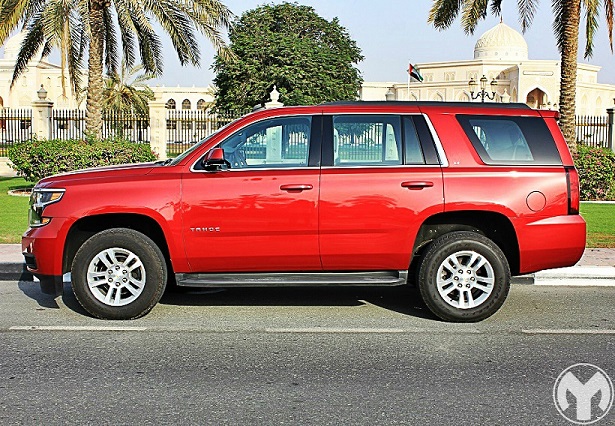 Carrying on the tradition of ‘big’ and ‘bold’, the new Tahoe fulfills the American vision of a full-size SUV. It is bold and it is definitely big. It is considerably taller than the huge Sierra we tested as well. Add to that, the big ‘in your face’ chrome front grille and big headlamps. I had received the LT model which is mid-level trim but thankfully even this lesser trim had the side steps that served as revelation.

The whole big-box-on-wheels appeal still continues with this new generation but Chevrolet has gone to great lengths in making this box more streamlined. The highlight is the new controversial headlights which swoop on the sides to make the front less boxy. Honestly, I prefer the styling of the previous generation as that looked like an angry beast. This new gen though, does look a bit tame. It shows that Chevrolet wanted to appeal to the European car buyers who don’t like the square shaped SUVs. But, I am glad that GM did not mess much with the look of the Tahoe as it still looks like a Tahoe from the side and rear. It is like what Land Rover does with the Range Rover – evolution more than revolution. 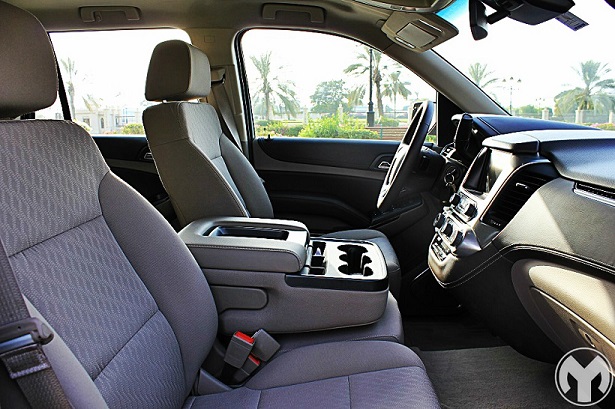 Just like the 2015 GMC Sierra I drove earlier, the Tahoe also feels like a nice place to be in. Even though it was a mid-level trim, it had leather wrapped instrument panel and armrests. Add to that, a leather steering wheel as well. However, the seats were fabric albeit good quality fabric which cooled faster than most fabric seats in this scorching heat. It was a nice retreat from the plastic dome daily driver I drove earlier called the Chevrolet Trax. Overall, no complains except the lack of leather seats is a let-down because for such an asking price, leather seats should have been standard. Also, the cabin is much quieter than the Sierra. 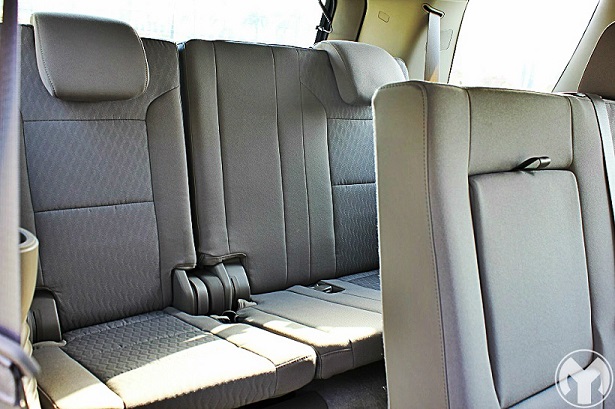 One thing which this SUV doesn’t lack is space. It has LOTS of it. So much so that you can seat 9 people in this caravan easily. Keep in mind, the top-spec LTZ trim level can only seat 8 people due to the front console extension. The boot space is claimed to be 2600+ liters but I do not care about numbers. It looked big enough for a family roadtrip – of course with the 3rd row seats folded down. Speaking of third row seats, 2 average adults can fit in easily. However, the third adult will have to squeeze in. But, if you have kids to squeeze, then keep ‘em in the back.

Visibility is, as expected, same as the Sierra, but thankfully I had gotten over that phobia of big truck dimensions before driving the Tahoe. The result: better experience than before as driving on the city roads and highways was easy but parking was again a daunting task. Even though, this car is lesser in width as compared to the Sierra, it still has blind spots while parking and I had to go back and forth while going in and taking out of the parking lot – but again that is my problem and I won’t expect the rest of you to have the same experience. 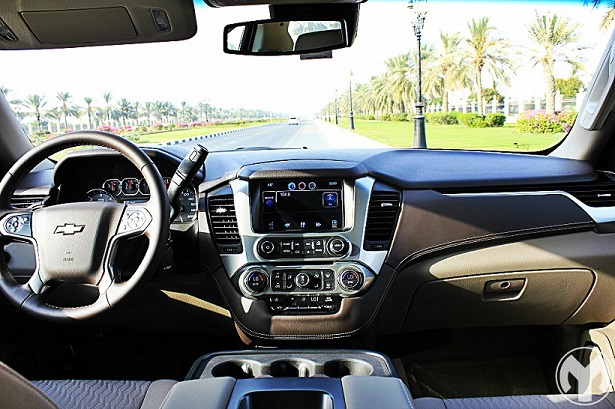 Since it wasn’t the top-spec trim so it is obvious that it won’t have all the advertised tech. Although, it did have enough features to satisfy my requirement including the infotainment system with navigation, climate control a/c with rear a/c controls, electric fabric seats, airbags, steering wheel controls, daytime lamps, auto-dimming mirrors, park assist (front and rear) and collision detection system. Overall, all was good in this department. 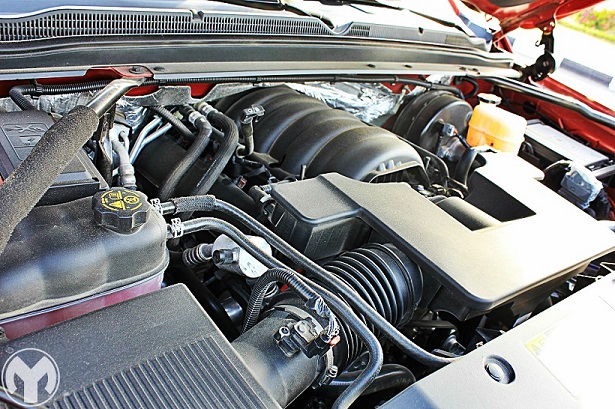 The Tahoe is powered by the same 5.3 liter Vortec V8 engine producing 355 BHP and 520 Nm of torque. Like the Sierra, one would expect this engine to perform and it does that – to some extent. The added seats in the back do affect the performance significantly. For instance, there is a highly noticeable lag between pressing the accelerator and the car’s movement. This is highly inacceptable GM. They could have tuned the engine to cope with the extra weight. But, I believe they are not marketing it as a performance vehicle per se so I will give them that. In the test run, the Tahoe accelerated from 0-100 in 9.6 seconds. Other than that, the transmission has the same issue as the Sierra while downshifting. This car also jerks while downshifting in auto mode but the effect is less noticeable – good job Chevy. Overall, the drive was similar to the Sierra and gave an average fuel economy of 14.6 l/100km as compared to 14.4 l/100km in the pickup. 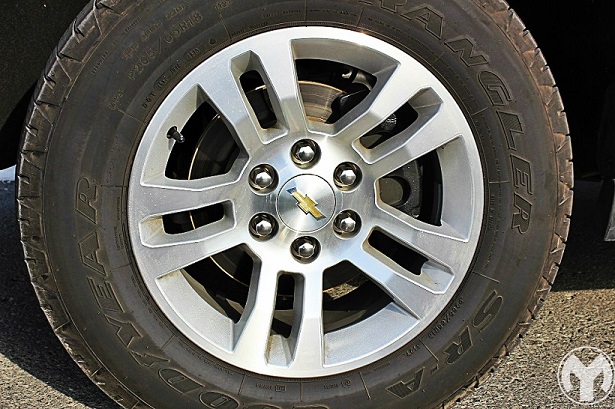 The Tahoe handles like any American full-size SUV/truck – the ride is lumpy. It is better than the Sierra as the suspension is not like a trampoline giving you sea-sickness but it can still be better. I know, it can’t be as luxurious as a Range Rover but it definitely can be on par with the Land Cruiser. The steering lacks response but that’s obvious given the sheer size and weight. The brakes are a bit disappointing as well, as compared to the Sierra because they feel squishy and take a bit more time to respond. I believed I knew how to decelerate big trucks but I was mistaken. Other than that, expect the tumultuous body roll and understeer but that’s a given.

As for off-road capabilities, the Tahoe is very much capable as the previous generation and has all the basic off-roading requirements. But due to the long-wheelbase, it is better to drive it on flat desert surfaces.

Overall, the experience was expected but brakes can be improved.

The new Chevy lives up to the Tahoe legacy and fulfills all the right boxes. It is big, powerful and spacious – with a taste for off-roading. It is a good alternative to the Land Cruiser if off-roading is not your number one priority because, let’s face it, not many SUVs can beat the desert king. In short, this is the perfect road trip vehicle for big families.